Don't F*ck with a Boner 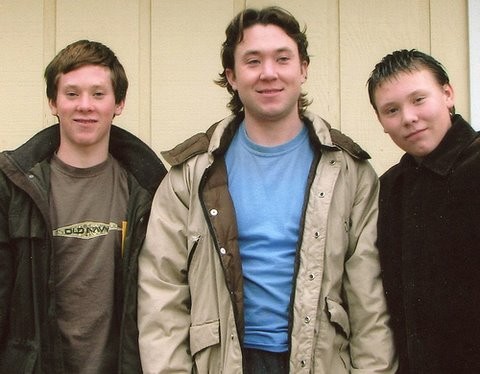 You might remember our extensive coverage of the ATV-riding gay-rage nightmare that led to the death of 30-year-old Joel Boner (pictured above, in the center) at the hands of party-boy-cum-Ocoee-redneck John Hawthorne last year. Boner, a generally well-liked homeless man from a large family, suffered the generational indignity of two high brats attacking him at his camp in the woods -- if 15 stab wounds, seven in the back, can be categorized as an "indignity" -- who then ran home and Facebooked about it, because that's what kids do, right? Well, we've kept in touch with Joel's uncle Lon since the event, and he's been a wellspring of insight into just how desperate Hawthorne's defense team was getting in the recent months leading up to today's sentencing hearing. In addition to suggesting that Hawthorne had gay friends, the attorneys also sought a retrial, thinking that maybe -- just maybe -- a year's passing would make a judge and jury a little more sympathetic to abject cruelty. Well, that didn't happen.

Superhero Orange-Osceola Chief Judge Belvin Perry brushed off Hawthorne's testimony that he loses sleep almost every night thinking about what he did, pissed on the request for a retrial and went ahead and threw Hawhtorne into the pokey for the rest of his "dude, brah" years, sentencing him to 38 years (of which he'll have to serve at lest 85 percent). It's not the life imprisonment we were hoping for, but it should be enough for us to not have to fear the roaming GPS anklet of another privileged asshole with anger-management issues for awhile. Justice, served.