September 11, 2010 at 6:18 PM
comment
For innumerable good reasons, I’ve always avoided watching MSNBC’s anniversary rerun of Today’s Sept. 11 coverage. But I threw the thing on this morning while I cleaned the apartment, and it turned out to be a fascinating lesson in what we’ve forgotten about the day we’ll always remember.

Sure, it’s an icky watch. While it’s fun to listen to Katie Couric repeatedly declare how “sorry” she is to have to interrupt her colleagues with a breaking bulletin – subsequent events having demonstrated that she was not only not sorry, but tickled down to the pubes – there are some just plain creepy moments. At one point, the in-studio crew tries to make contact with (the since-deceased) Tim Russert but can’t get through to him. Does anybody vet this stuff before rebroadcast?

Yet it’s worth those occasional discomforts to hear and see anew just how many liberties our commentator class felt emboldened to take while they were waiting for the actual facts of the situation to become apparent. For instance, did you realize that Tom Brokaw had declared our nation to be “at war” and had advised that we should all be prepared to give up some of our precious rights – ALL BEFORE NOON? 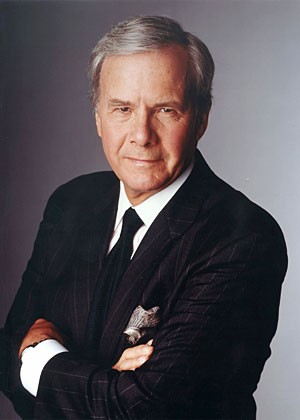 Seriously, the towers hadn’t even finished crumbling to the ground and Air Force One was still on its panicked flight from Florida to (we assumed) Washington, and this asshole was already usurping the powers of Congress and the Presidency to declare a sea change in our very way of life. And all, apparently, because he was thrilled to trembling at having a Real Modern Conflict to go along with the Greatest Generation hagiography he had already turned into a cottage industry.

That this turned out to be the administration’s very stance raises a fascinating chicken-or-the-egg question: Do mainstream journalists voluntarily parrot the party line they’re being fed, or does their very embedding in the corridors of power make such overt guidance unnecessary? Do they pick up so many philosophical cues via osmosis that they can simply be relied upon to instinctually summon the “right” (in both senses of the word) interpretation of events when needed?

It was downright scary to hear how often the Today bunch were willing to declare that no one in the government could have been prepared for what was going down that morning. We now know that just the opposite was true. Yet before engaging in any apparent consultation with anyone in the intelligence community, these voices of record were all too happy to give the relevant agencies a total pass.

That’s just not within the purview of any honest press. But it’s what happens when a round-the-clock news cycle intersects with a calamity that initially defies understanding. The most honest admission a newsperson could make – that s/he doesn’t know what’s going on, and that it would be almost obscene to suppose – is practically an invitation to the audience to tune to another station, where a less principled talking head may be all too willing to take a wild guess and call it “the news.”

The knee-jerk myth-making goes on today, and it’s not confined to the Fourth Estate. When MSNBC finally broke away from its ghoulish rerun, it treated us to snippets of the anniversary comments made this morning by our two most recent First Ladies. And as they spoke of the United 93 tragedy, they, like a good many in this country in the ensuing nine years, conflated what little we know about that ill-fated flight with what it suits us to believe. Heretical though it may sound, the heroic narrative we’ve created around Mark Bingham et al. depends partially on details only someone on board the plane could reveal – which is to say, details we’ll never have. (Paul Greengrass’ film United 93, which I loved on a dramatic level, likewise spackles those gaps with hopeful speculation.)

Is that so bad? Is it really terrible to assume that passengers who told their loved ones they were going to rise up against their captors actually did so, and that they thus succeeded in “saving” the White House? Does it do any harm to make them “heroes”?

Only insofar as that thought has an unfortunate corollary, which is that their loss would somehow be lesser had they acted differently. The obscenity of Sept. 11 is that it was perpetrated against innocent civilians who were, unlike their government, utterly unprepared. So why do we demand that they be more than that? God wouldn’t love Todd Beamer one iota less had he sat in his seat and cowered all the way down to the ground, and neither would I. Weakness, fear, even cowardice

these things make us human as much as do valor and courage. I refuse to evaluate human beings based on how they behave under the absolute worst circumstances.