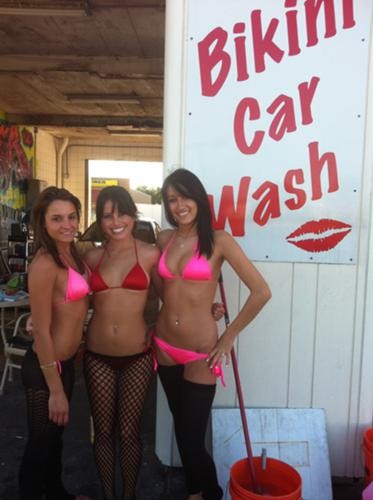 Though temperatures are dipping to near-freezing levels, you can still pull up to the Baywash building on the corner of Semoran and University Boulevards and have your car washed by attractive young women wearing bikinis.

“People tip better when it’s cold, because they feel bad for us,” says 18 year-old Lauren Tipton, who, on the day of our visit, dons a pair of black leg warmers in addition to her traditional garb.

Though the girls are allowed to wear jackets and sweatpants when it gets colder, rest assured, the bikinis are on underneath – it's company policy. Yet the power of imagination isn’t strong enough to maintain the mostly male customer base over the season – according to Tipton, in winter the car count is only around 10 per day, down from 60 in the summertime.

Yet the warm-blooded business refuses to hibernate. “People still need their cars washed,” Tipton says. Baywash owner Steve McMahon goes a step further, suggesting that bikinis or not, some of his clients wouldn’t want their cars washed by anybody else. “We have a high-end clientele [because] the girls have a reputation of doing the best job in town,” he says.

(The most basic wash costs $10, though women only pay half that. Tipping is encouraged.)

McMahon and the girls operate out of a car wash port next to the Citgo gas station across from Aloma Elementary school. (The gas station abandoned the port after repeated and costly malfunctions of the automated wash system, which performed poorly even when it was working.) McMahon says that by Friday of this week, the building will have doors, windows, and a heating system installed, as well as benches lining the inner wall so that clients can get a better view of the action. “It’s going to be up close and even sexier,” he says, adding that “the interior vacuum is the sexiest, because they have to crawl inside.”

McMahon is also planning on stretching his usual closing hour (7pm) until 11pm on Fridays and Saturdays next month for “Baywash Afterhours,” where there’ll be music, blacklights, and law permitting, a few tipsy employees and customers. “We’re going to have sort of a car wash club scene,” McMahon says. “The girls will be a little crazier.”

We asked McMahon if the wash's relatively hedonistic environment had attracted much criticism. “Believe it or not, even with the school right there, and the Christians the way they are, no, not really,” he answers.

Baywash does, however, come under the eye of those sitting in cars parked nearby for a suspiciously long time. “We get the occasional creeper,” says Tipton.

In response, McMahon is planning to add the footnote “WE SEE YOU” to Baywash’s new signage. “Like a scarecrow in the cornfields,” he says.