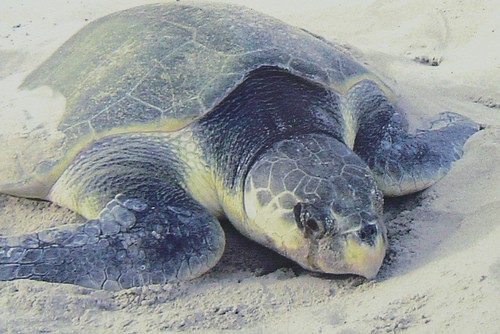 Continuing our fascination with the phenomenon that is cold weather, we bring you this piece of environmental news.

Last night a handful of New England TV stations reported that 20 sea turtles were on a Coast Guard airplane en route to SeaWorld in Orlando after several weeks of recuperating at the New England Aquarium. The group of Kemp's Ridley sea turtles – one of the most endangered species of sea turtle – had washed ashore in previous weeks in a hypothermic stupor, thanks to being "lured in by Cape Cod Bay's shallow and sheltered waters, but then stranded by the cape's daunting hook," according to a report by NECN.

The story goes on to say that the group of 20 would have stayed in New England if not for the 110 other Kemp's Ridley turtle survivors crowding the Aquarium's liquid bunks. "This is our second highest stranding season of probably in the last 30 years," said the director of the aquarium.

It's been a rough year for the Kemp's Ridley turtle, as the Deepwater Horizon disaster also affected its kind disproportionately. The New York Times reported in May that 10 days after the accident, 156 sea turtle deaths had been recorded; "most of the turtles were Kemp's Ridleys."

(This does raise the question of whether airlifting these animals to safety runs counter to evolution; perhaps this strain of turtle simply cannot adapt to the modern realities of frequent oil spills and radical weather fluctuations. But it would be hypocritical to make that point unless one were part of a human bloodline that managed to completely avoid all modern medicines and vaccines.)

Despite the icy gloom in the news, there is room for hope - for instance, this writer was encouraged to know that SeaWorld does not exist solely to try and extract money from the Homo sapien species.

Not to mention the fact that we take great joy in reading the local news' hurried take on complex scientific matters. Because we golden notepads at the Weekly shudder at the deadlines of a daily, we will withhold criticism of the headline "Sea turtles fly to Orlando to continue rehabilitation," which appeared on the website for Boston's WHDH-TV, but we will still reproduce the sole comment posted to the story.

I think that it is really neat that these sea turtles can fly, and equally neat that a member of the coast guard can pilot one. My only question is, if they can fly shouldn't they be called sky turtles?

Good point. The lede of the WCVB-TV report could have also used an extra couple minutes of attention:

BOSTON -- More than a dozen endangered Kemp’s Ridley sea turtles were scheduled to board a plane from Hanscom Air Force Base in Lincoln, Mass., on Sunday, to head home for the holidays.

The 20 turtles were headed to SeaWorld in Orlando, Fla.

If it were true that these turtles had reached the point of calling SeaWorld "home," then the question of whether to rescue them would have been a much easier one to answer.