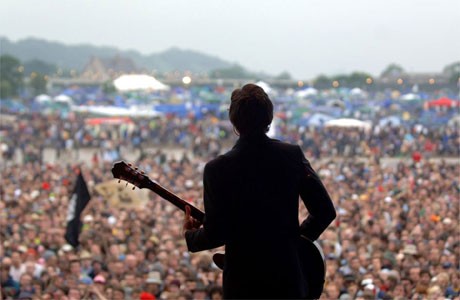 I will likely live to regret writing these words, but there's good reason to believe that the glad-handing press conference held today at the Amway Center announcing the arrival in Nov. 2011 of "Florida's largest music festival" may actually wind up being a good thing. Typically, whenever our city officials dip their toes into large-scale pop-culture waters, the results are both embarrassing and expensive (remember how Lou Pearlman was gonna save downtown ... with a blimp?). However, right there in the flesh was Melvin Benn, the managing director of Festival Republic (née Mean Fiddler) – the man and the company that produces Reading. And Glastonbury. And Leeds. – saying that the company will be putting on a large-scale, annual festival right here in Orlando. And by large-scale, he's talking 40-45,000 people a day. And Festival Republic is talking about this thing starting in November. OF THIS YEAR.

Now, no lineup has been announced, nor have ticket prices, or, as far as I can tell, a name for the festival, but we're promised all that in due time. (Just like Lou Pearlman's blimp.) Hopefully it all comes to pass and we haven't been played like the townfolk in The Music Man again.

(UPDATE: The festival's gonna be called "Orlando Calling," which was part of the announcement and I totally missed it ... because it's a terrible name.)

(Hat tip to Mark Baratelli at The Daily City for the video.)