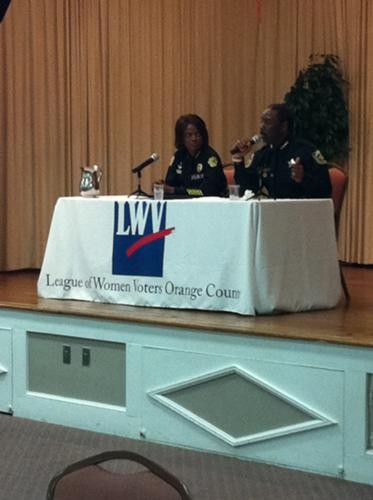 A few minutes after midday today, husband and wife Jerry and Val Demings, the heads of the Orange County police and Orlando police, respectively, strode into the downtown Sorosis Club to speak to the local League of Women Voters chapter about The State of Crime Fighting in the area or something like that. Since we had been to a similar function only weeks earlier at Orlando Police Department headquarters, we chose to cover this event in our capacity of gossip rag, hoping to get some rare P.D.A. shots of the husband-wife tandem. What a disappointment. The two entered totally not holding hands, then, when called to the stage, were seated at a table draped with an opaque white curtain, thus making it impossible to infer any intimacy from the proximity of their ankles. Jerry threw us some crumbs, however, with one acknowledgement of their marriage: “The relationship between the Orange County sheriff and the Orlando police chief has never been better,” he said to mechanical laughter. Sigh. On to business, then. Not even the bourgeois clinking of silverware at this catered lunch could hide the obnoxious sound of an economic crunch. One audience member, for instance, asked the tandem why neither county nor city police is installing dashboard-mounted cameras for all its police vehicles. Jerry responded that those cameras are a “luxury” much further down on his list of priorities than filling fiscally unfillable department vacancies, replacing aging radio equipment, and giving overdue raises to deputies. “There are lots of things that we’d like to have, but we just can’t afford it,” he said. Not bad. In a response to another audience question, Jerry gave a swift slap to the Arizona-style immigration law proposed for Florida that would allow police to check immigration status at routine traffic stops. “My deputies have their hands full enforcing state and local laws,” he said. “If we’re enforcing federal laws [as well], I think we’re diluting our effectiveness.” Impressive. As the presentation wrapped up, we admit our fear for the Demings’ relationship turned into hope, a hope that maybe, well .what we mean to say is if you ever end up alone, Jerry, give us a call.