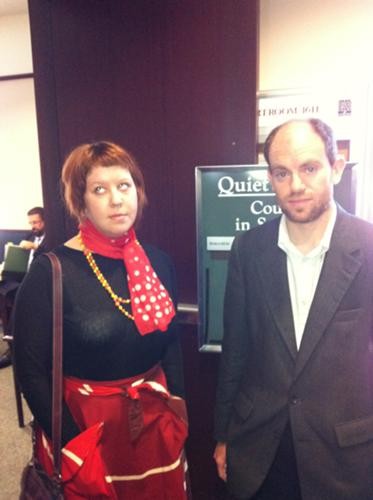 Last February, this paper reported on “Brian Feldman Marries Anybody,” the latest in a long line of absurdist art experiments from Orlando's most prolific (or at least most self-publicizing) performance artist. Most of Feldman's projects – from leaping off ladders to dining onstage with his family – have been surreally stripped of any identifiable purpose, but this particular performance came packed with political meaning.

In last year's “Brian Feldman Marries Anybody: Part I”, we witnessed Brian get engaged to fellow Orlando artist – and relative stranger – Hannah Miller, who was randomly selected from a handful of volunteers in a game of spin the bottle. In “Part II,” on February 12, 2010, Brian and Hannah were wed in a civil ceremony at the Orange County Courthouse, with a packed audience of journalists and well-wishers in attendance. The goal behind this self-confessed sham wedding was to bring attention to the cause of marriage equality by highlighting how ridiculous it is that casual heterosexual acquaintances can be wed without qualification, while committed same-sex couples can not.

The Feldman/Miller protest-union was dissolved this morning in the conclusion of this project, “Brian Feldman Marries Anybody: Part III.” At 9:15am on January 19th, 2011, a handful of supporters (including Orange County Arts Director Terry Olson, sketch artist Thomas Thorspecken, and this reporter) squeezed into the tiny courtroom 16H of the Orange County Courthouse to witness the annulment of Brian and Hannah's marriage. The brief hearing took under five minutes, during which Feldman (acting as his own attorney) affirmed that he and Hannah were relative strangers before the wedding, that they had seen each other approximately 10 times in the past year, and that they had “not consummated the marriage in any way.” Judge Maura T. Smith (ironically seated beneath a sign reading “Equal Justice Under the Law”) asked Hannah if she agreed. When Miller replied “yes,” Judge Smith said “that was easy,” and swiftly sent the couple down to room 320 to process their paperwork; she mostly just seemed confused by the observers in attendance, asking if we were law students.

Following the proceedings, friends congratulated the ex-couple, and Miller joked that she was encouraging Brian to “take a new wife every year, like a pirate.” Feldman said he was surprised how smoothly the process went, since he had called legal aid and the Orange County bar in an unsuccessful attempt to find a lawyer who specializes in annulments (which are apparently very rare in Florida).

Afterward, Miller stood outside the courthouse and made a moving statement on marriage equality, which was filmed by her boyfriend Jack Fields for distribution on YouTube. Miller said that she was a “child of divorce” who had sacrificed her personal belief in life-long marriage in order to make a statement against government-endorsed oppression of homosexual couples.

You can watch her statement now at www.youtube.com/watch?v=YtAJvauakc4