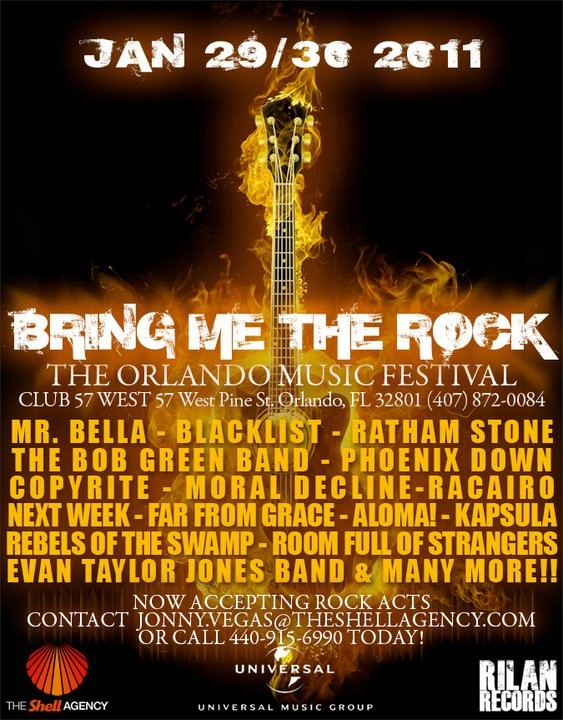 So, it looks like there's a new festival happening in Orlando next weekend. Actually, correction: the Bring Me The Rock Festival not a music festival in Orlando, it's "The Orlando Music Festival." Whoa. Florida Music Festival, Anti-Pop, Orange You Glad, Indie Summer Fest, Orlando Calling ... you guys all just need to back the hell up, because the Orlando music festival is about to go down.

Sorry, but after years of watching these things come and go, the announcement of another catch-your-big-break "festival" being held in a downtown club makes me yawn so loud I can't even hear my Bullshit Meter beeping. But maybe you can hear yours after seeing that band lineup. No offense to the bands, but very few of them have, shall we say, made much of an impact in Orlando's club scene. Yet, here they are playing a festival. THE festival, apparently. HOW DOES THAT HAPPEN?

This "Bring Me The Rock" festival has been put together by some ... thing called "The Shell Agency." Take a second and check out their website; it's got a homepage with a content-free, music-industry-bullshit-laden mission statement, an empty "Artists" page, two error pages, and a list of similarly-positioned "showcase" events across the country. That's it. That's this company's entire online presence, other than a ReverbNation profile with four fans. But hey, they're putting on a music festival. And this is how it works: They slap a "Universal Records" logo on the flyer, promise bands a showcase with a major-label A&R rep (which may or may not happen, but who cares?), and then get the bands to sell tickets to the show. Let the bands do the hustling, write a check to the venue for renting it out for the weekend (if they even do that), pocket the profits.

Now, I'm not saying this is what this Shell (Game) Agency has done for this festival, but I'm saying that I've seen scenarios play out like this twice, three times a year in this town, and this one looks a lot like those other ones. It's not just Orlando, either; any decent-sized city with a good music scene has things like this pop up regularly, trading on the hopes and dreams of (very) young bands who think that by selling a few tickets or ponying up a "nominal" registration fee, they're just one good gig away from hitting the record-label jackpot.

IT. WILL. NOT. HAPPEN. Can bands please stop pretending that it will? The sooner they do, the sooner they can get to work doing the things they need to do to actually make a career for themselves as musicians.

If you're a fan of any of these bands, that's awesome. Go support them when they play their own gigs around town.

If you don't know any of these bands? Well, let's just say that the mainstream modern rock that dominates this lineup doesn't provide a very accurate representation of the Orlando music scene.