Sundance: Miranda July Comes Back to "The Future" (Updated w/reviews) 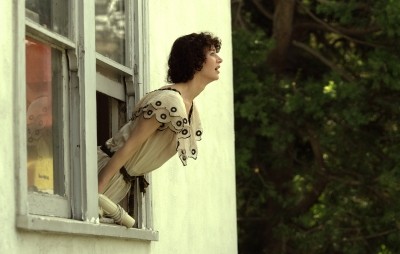 So it's time for Sundance once again, and time for every film fan who isn't there in Park City to whine about having to wait to see the films. Sure, it's not Cannes or Toronto, but it still looks damn fun and the films there still have plenty of buzz.

The pick of the festival, from the buzz and talent involved anyway, has to be Miranda July's The Future. It's been six years since the Me and You and Everyone We Know auteur has made a film, and this one sounds as arty and, yes, quirky as her last effort.

The Future begins one afternoon on a sofa. Sophie and Jason, a 30-something couple in Los Angeles, realize that in one month, their lives will change radically when they pick up a stray cat they’re adopting. Wanting to take advantage of their fleeting freedom, they quit their jobs, disconnect their Internet, and pursue new interests, all of which literally alter the course of time and space and test their faith in each other and themselves.

The Future screens tonight tonight at 6:15MT, its first of three Sundance screenings. There is also an odd mailing list you can sign up for on the film's official site.

Haven't seen Me and You and Everyone We Know? For a limited time SundanceNOW is offering a discount to Orlando Weekly readers to rent the film online. Enter the promo code MEANDYOUPROMO at checkout and stream away for only 99 cents!

Some reviews from the first screening are in.

indieWIRE's Eric Kohn gives it a B+, concluding that "July’s idiosyncratic sensibilities are destined to divide people, although mostly strong critical reactions and a hip appeal among artsy crowds may elevate its profile."

One more positive review from Alison Willmore at IFC.com, which boils it down to: see it if you liked her style in Me and You and Everyone We Know, but avoid it if you have a problem with tweeness.