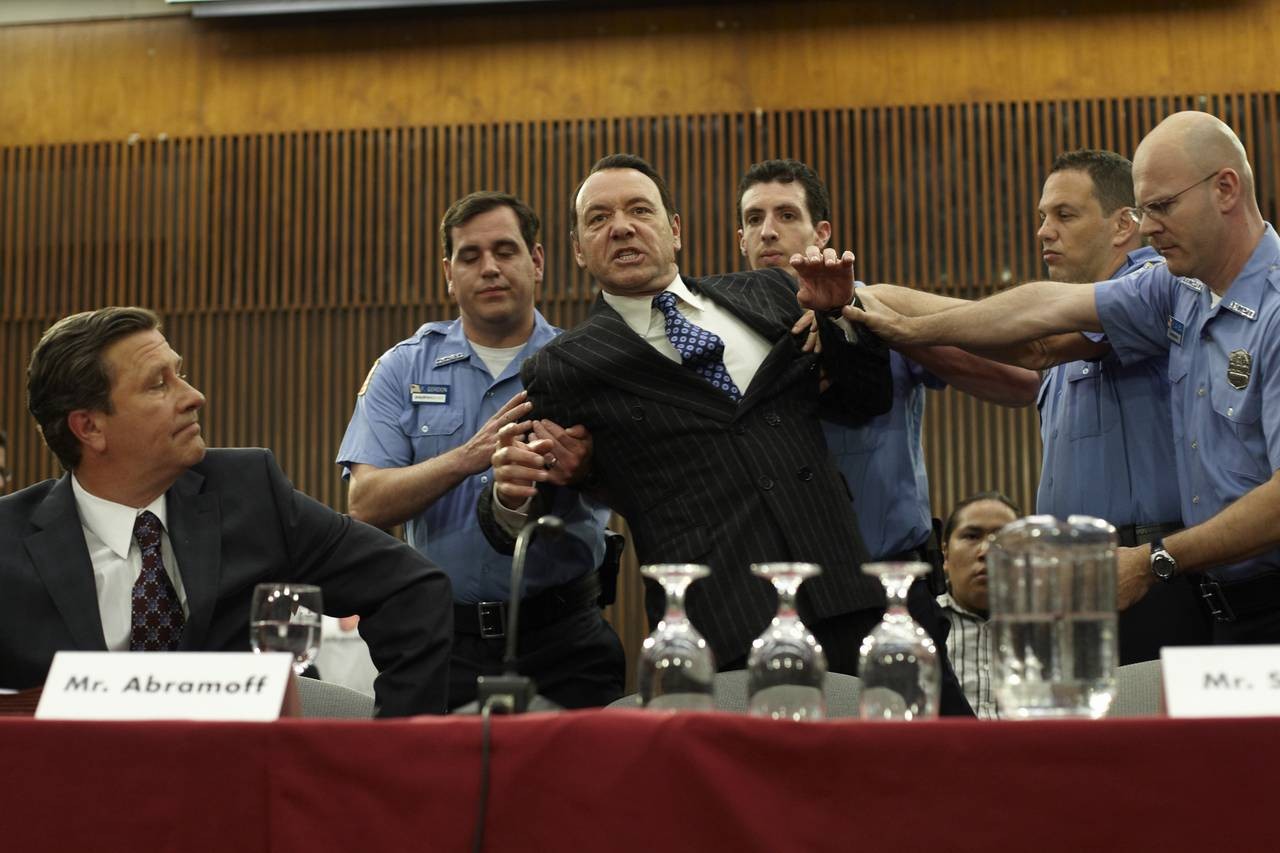 If you ever wondered where Washington went wrong, here’s your culprit: lobbyists. Essentially a brigade of well-dressed parasites attacking the central nervous system of our nation, they’re criminals who are no better, ethically, than the Mafia, Commie spies or Old West cattle thieves. Casino Jack, director George Hickenlooper’s last film before his unfortunate death late last year, is about the parasite of all parasites: Jack Abramoff. Kevin Spacey stars as Abramoff, the federally convicted pride of Atlantic City. Barry Pepper plays his partner in crime, stool-pigeon Mike Scanlon, as the two make a game of Monopoly out of Washington, selling access to their friends in high places (congressmen Bob Ney and Tom DeLay, among them) to the highest bidder. Those bidders were often the worst kinds of people imaginable; exactly the type you hope had as much distance from places of power as possible. But in Monopoly, it’s only about the money, not the ethics, and it’s certainly not about the people who have to live under the Boardwalk because of your actions. The script, by Dead Ringers scribe Norman Snider, weighs as heavily as lead on the actors’ tongues. Dense bouts of exposition, stiff faux-Ebonics lines taken word-for-word out of emails and shoehorned into casual conversations – very little feels organic in this film that has trouble making up its mind whether it wants to be a fun little political-intrigue comedy or a serious exposé of a bunch of crooks and liars. But it’s the director’s fault as much as the writer’s. It needs to be said that Hickenlooper was a documentary filmmaker – and a very good one at that – but despite some very basic similarities, narrative and documentary forms have little in common with each other. They require a vastly different skill set for each. In spite of that, Spacey and Pepper make it worthwhile. Spacey’s performance is not one of a lifetime, as others seem to be saying, but is better than anything he’s done in a decade. His Abramoff oscillates back and forth between charm and rage, and Spacey does both flawlessly, often in the same scene. It’s a performance that builds along the way; as Abramoff’s power and influence grows, so does Spacey’s chops, which he needed a lot of to act in all those terrible, arch-villainous hats. Pepper is note-perfect as the smug, young conservative douchebag Scanlon, who’s in politics for the rush as much as the money – not exactly a higher calling. Unlike Abramoff, with his charities and attempt to build a Hebrew school, Scanlon makes no bones about his desire for fortune and stewardesses. While Spacey and Pepper’s performances are not ruined by the film they’re in, they are betrayed by the exposition-laden script, sub-par castmates (Jon Lovitz in particular) and an underwhelming directing effort. The film could have been for Hickenlooper what All the President’s Men was 35 years ago for Alan Pakula: a defining marriage of the directors’ particular talents. Instead, Casino Jack fits nicely into Abramoff’s opening rant against mediocrity: “You’re either a big-leaguer or you’re a slave clawing your way onto the C-train.” –