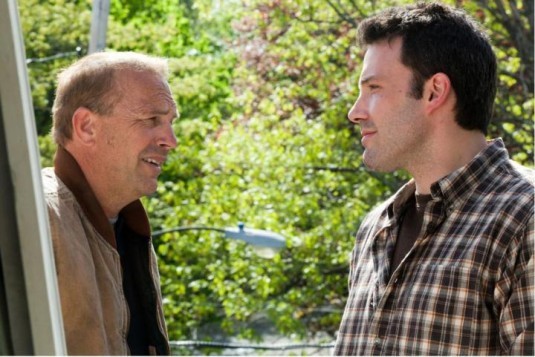 In the Dark Ages, before I was allowed to sit on my ass and review movies for a living, I worked for mega banks and I worked in construction. I worked under, with and alongside some truly sinister people at the banks and some of the best people I’ve ever known at construction sites. I worked under, with and alongside some lifelong friends at the mega banks and some truly heinous assholes in construction. I was probably considered both by some people at either one. Your job does not define you, nor does a line of work hint at what type of person makes money doing it. Yet here we are, in 2011, still filming large corporations in cold blues and still heralding salt-of-the-earth foremen as the pinnacle of Midwestern nobility without any consideration for the actual interchangeability of those two concepts. With The Company Men, writer-director (and President of the Writers Guild of America) John Wells heaps a double serving of that condescending trope onto a public wearied and weakened by financial collapse and skyrocketing unemployment.  Wells must have figured now is the perfect time to speak to us – “Your 401k might have disappeared, citizen, but come with me and I’ll show you how Ben Affleck gets back to his roots to get back on his feet.” Affleck plays Bobby Walker, a cocky hotshot at GTX, a transportation company in the midst of heavy layoffs. Walker, despite his sense of self-invincibility, is one of those shown the door and he’s surprised to learn that his underlings either aren’t in a position to help him, or simply don’t want to. The Porsche-driving, McMansion-residing company man is then forced to downsize his life. He hits the phones and tweaks his résumé at a job center/halfway house for the formerly rich with a cast of quirky seekers. He sells the Porsche, moves back in with his parents and his son – gasp! – sells his Xbox, a Christmas gift. He grudgingly accepts a very reasonable job offer from his brother-in-law (Kevin Costner) that he previously scoffed at – the aforementioned construction job. He breaks in his Home Depot tool belt, gets his hands dirty and learns to tolerate his family again. [Mild spoiler alert:] By the end, Walker’s faced with two scary options: Continue toiling as a builder of houses, a currently slumping market, or accept an offer at slightly less than $100k a year – a paycut! (Although, if you’re going to live in Marblehead, Mass., you’re going to need at least that; the guy can’t be expected to move to a less expensive neighborhood.) As you can probably tell, I took offense to this film’s tone, its grasp of blue-collar colloquialisms and its attempt to co-opt such a painful time in so many peoples’ lives without ever leaving the Hamptons. It wastes Tommy Lee Jones, giving him teeth-pulling scenes of doing nothing but looking concerned for the company (GTX) he co-founded and somehow, despite sitting on the company’s board of directors, being so naïve as to keep asking where their loyalties lie – to their workers or the shareholders? (Craig T. Nelson is again forced to play the bad guy who dares give him the answer he already knows – that a publicly traded company is indebted to its stock-holding owners – while Costner can hardly seem to cringe out lines that explain how he’s paying out of pocket to give his workers a living.) Ultimately, The Company Men says nothing about the state of things, offers no new lens from which to look at them and tries to convince us that corporate assholes deserve our empathy, that the blue-collar labor force is more interested in honor than money and that resurrecting obsolete industries is the ticket out of this mess. All of that’s true and none of it is. The fact that the one-time showrunner of E.R. and The West Wing apparently can’t tell, or possibly simply show, the distinction is both surprising and depressing. –