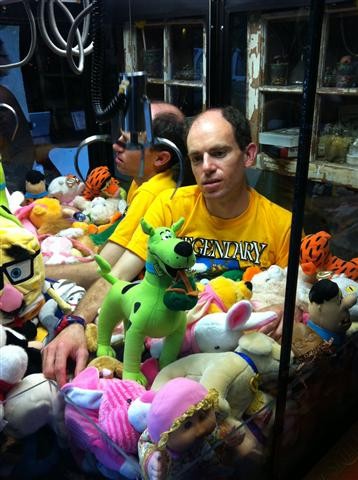 ArtsFest 2011, the week-long annual celebration of admission-free entertainment sponsored by United Arts of Central Florida, is currently in full swing. This year's lineup has encompassed an enormous range of art-related activities, from Terry Olson's Public Art Walk (which you can read about in the next issue of OW) to next weekend's Orlando Folk Festival at the Mennello Museum of American Art. But, as usual, no other sponsored spectacle pushes the boundaries of performance quite like Brian Feldman's latest stunt.

On Sunday, February 6th, while you were watching the Superbowl, Brian was spending 16 hours at Stardust Video and Coffee, stuck inside an arcade crane game crammed with stuffed animals. Such was Feldman's dedication to Skill Crane Kid (as he called the project) that he didn't merely rent; he's now the proud owner of the claw machine, complete with customized marquee artwork.

According to Brian, the installation was in tribute to little Timmy Novotny of Sheboygan, Wisconsin who in 2004 “walked away from his father while he was using a pay phone at a Piggly Wiggly supermarket and proceeded to climb inside of a skill crane machine through its prize slot because he “just, like, wanted to go in there.”

I'm not sure if there was a deeper meaning behind this exercise, but it sure seemed to bring a smile to the faces of the people pumping 50 cents into Brian's slot striving to snag some plush. As you can see in this video, I didn't win myself, but my wife went home with a stuffed cat-angel thanks to a little “inside assistance” (the only way anyone can win with those pathetically weak claw fingers). And you can't claim Feldman doesn't suffer for his art; when I ran into him the following day, he was still sore from his day of confinement.

Here's the final tally on the event, direct from the artist himself:

Number of miles it took to get the skill crane machine from Sarasota to Stardust: 275

Number of times someone took a chance to obtain a prize from the machine: 217

Number of toys in the machine throughout the day: 219

Number of toys won from the machine: 91

Number of cents it cost to play The Skill Crane Kid: 50

Number of people (1 per party) who agreed to complete The Skill Crane Kid survey: 60

Number of people who drew The Skill Crane Kid on the back of the survey: 29

Number of minutes Brian Feldman slept the night before The Skill Crane Kid: 20

Number of hours Brian Feldman remained inside the skill crane: 16

Number of adults and children who tried to win Brian out of the machine: 12

Number of months of planning once Stardust agreed to host: 9

Number of years it took from project idea to realization: 5

Number of families who drove 50 miles or more solely to see The Skill Crane Kid: 1

Number of memories created from this experience: Countless