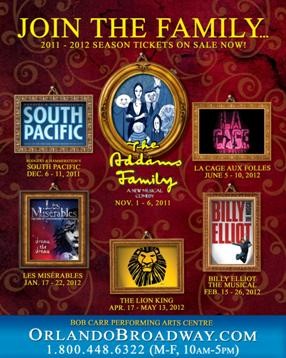 The singing witches of Wicked return to Orlando's Bob Carr next Wednesday (Feb 23), marking the midway point of Fairwinds 2010/2011 Broadway Across America season with an extended month-long run of Stephen Schwartz's super-successful Wizard of Oz spin-off. We've still got Shrek The Musical in May and HAIR in June to look forward to, but if the current season (which kicked off with Young Frankenstein) has left you feeling a bit green, fear not – the 2011/2012 season is right around the corner.

Florida Theatrical Association, local presenters of the Broadway series, announced yesterday the lineup for the next season. The next six-pack of plays are being sold with a “family affair” spin, which seems appropriate for this mix of gracefully-aging classics and adolescent upstarts. The series, which will kick off this November, includes something for every member of your extended clan:

If all this family fun threatens to drain your fundage, fear not. While there's no such thing as a free lunch in the land of Oz, cheap tickets are available to the Bob Carr's latest visitors. Just show up at the box office 2 ½ hours before each performance of Wicked, and you can put your name in the lottery for a pair of $25 orchestra seats. Remember to bring cash though, because they won't accept credit cards or slippers, even if they are silver or ruby.