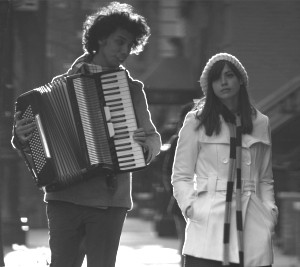 By now you've all seen the goofy-haired kid who won Best Short Film at the Oscars last night for his 18 minute black and white thesis film, God of Love. His name is Luke Matheny, an NYU student from Brooklyn (via Wilmington, Delaware). But most of you probably haven't seen the film. You should -- and can: it's on iTunes in HD for $2.99 (or $1.99 for SD).

Anyhow, God of Love is a simple, well made film and you UCF, Full Sail and Valencia film students would do well to study it. During my own time in Film School, the one thing was constantly drilled into our heads over and over again, through each new class, each new teacher, was this: casting. Casting is everything. Don't run a single frame until you have the right cast in every key part. It's the most basic thing, but so often overlooked in student films, and usually ends up being their downfall.

Matheny got the casting on the nose, though I'll admit I was a little worried about the fact that the director had cast himself in the lead role. It was an unfounded bias in this case, as Matheny does have the physical chops to carry the load of a lead romantic protagonist. Trying to place it, the only thing that comes to mind is that he has something of a human Kermit the Frog quality to his face. It naturally attracts you to root for him, just through the power of the eyes and slight ticks of the mouth, even though the film is basically about subverting the free will of another person for his own gain. It sounds like a goofy thing, but his goofiness is indeed one of the film's main charms (I know, get a thesaurus -- but charm is the key word for this film).

The film itself rests on a series of gimmicks, which I don't mean as an insult. They are -- you guessed it -- charming gimmicks. The story is about a lounge singer and darts whiz named Raymond Goodfellow (Matheny) who suddenly finds himself with the powers of Cupid thanks to a mysterious package left for him containing love darts. The darts will work for six hours, we learn, and then the love struck couple have the free will to stay in love -- or not. When he tries the darts out on his bass player and a random girl only to find out that they, hey, they actually do work, he sets an elaborate plan in motion to use them on the girl of his dreams, Kelly (Marian Brock), who plays the drums in his lounge band but is in love with his best friend and guitarist, Fozzie (Christopher Hirsh). This plan, of course, is not with out its problems and -- oh, my -- charming solutions.

The gimmicks work here just long enough to sustain a short film, though none of them would be able to carry a feature film on their own. That'll be Matheny's biggest problem to overcome when his eventual feature directing deal comes, but that's a concern for later. God of Love is very much a film school effort, somewhat pointlessly shot in black and white, but it is not dragged down by the usual film school nonsense otherwise. There are no guns, no drugs, no shots of cigarette smoke curling into the air, or desperate 20-something male characters narrating their awful place in life while doing nothing about it. I said it was a simple film, and it is. Simplicity often makes the best films, which is something a lot of directors (especially ones still in film school) don't realize. Just give us a straight line and characters to care about, that's all. You can have your gimmicks all day as long as you give us those two simple things, and Matheny did. Good for him.