Get Ready for Round 2: WGA, Studios Begin CBA Talks 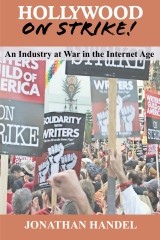 We're just finally beginning to get past the massive and systemic negative effects on the output of Hollywood from the Writers' Strike of 2007-08 and now the WGA and AMPTP have released a statement through Deadline that it's time for both sides to renegotiate the CBA again.

Nothing was really solved in the last CBA, so there will be plenty of venom this time around too, count on it. This will not be a simple process.

Will it lead to another strike? 100 more days of judging how the strike is going by the color of Nikki Finke's phlegm and the state of Dave and Conan's beards? We'll see. One thing is certain, at least: it will come to the brink of a strike. It will very likely come down to a second strike as well, but so one so close to the last strike will not be good for anyone. Let's hope cooler heads and better angels prevail, but maybe we better get Santa Claus and the Easter Bunny on the job just in case.