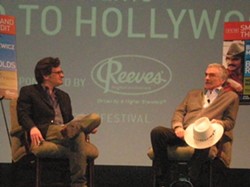 That. Was. AWESOME! Tonight, the Tampa Theatre played host to TCM's ongoing roadshow in the lead-up to the network's own film festival in April. The event, tailored specifically for a Florida crowd (and the first For Reels-sponsored event - sweet!), featured a 35mm-print screening of Smokey and the Bandit, preceded by a Q&A with the film's star, Burt MF'ing Reynolds, hosted by TCM's Ben Mankiewicz. And it was sah-weet! A crowd of hundreds waited outside for the Theatre to open its doors, entertained by the spectacle of a replica of the film's trademark Trans Am parked in front. Burt drove the crowd into a frenzy just before it all began by coming outside, the Bandit hat in hand and sitting on the hood.

Inside, Mankiewicz played moderator, staring sternly at some particularly annoying ringtones, trying to ignore a couple of inebriated fans and laughing at Reynolds' jokes. He did a pretty classy job. Reynolds, though rail-thin and soft-spoken, was as game as I imagine he gets, pulling his face for laughs and timing responses just right. Though he didn't stick around for the film – literally, I watched him hop in his limo minutes after leaving the stage – he gave the crowd the goods. Some highlights:

He remembered Liz Taylor's "bawdy, raucous laugh." He says during shooting, he was falling in love with Sally Field, while "she was falling in like." He always wanted to work with Billy Wilder and Spencer Tracy. He stalked Tracy as a young actor, and one time asked him, "Is there anything you're not good at?" Tracy responded, "Life." He told his then-stuntman friend, Hal Needham, that Needham's screenplay for Smokey and the Bandit "was the worst script I'd ever read but it could work." He thought it needed "Second City guys," as he envisioned it an improv-heavy romp. He regrets the infamous centerfold spread and chalks it up to "arrogance and idiocy" and he believes it cost him respectability in Hollywood. He doesn't regret not taking the role of Bond when it was offered, still maintaining that an American should not play Bond. When an excited fan said he wanted to ask Reynolds a question he's wanted to ask since he first saw Smokey and the Bandit at age 7, the question was, "Are you my father?" Reynolds asked how old he is now, did the math in his head, and responded, "It's very possible."

Burt. MF'ing. Reynolds, ladies and gentlemen. Thank you to the handful of this blog's readers who made it out and to those that didn't, we'll do it again soon!