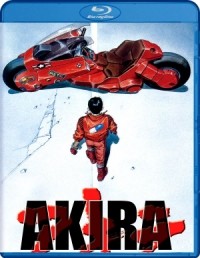 Katsuhiro Otomo's 1989 epic Akira is probably the most well known and widely seen anime film in America, and is one of the few to have actually been shown theatrically in North America. Well, it's not up on the big screen again, but you can see the next best thing as Orlando's own Japanese culture society, Nihongo Orlango, will be screening the Bluray at Urban ReThink on Tuesday, 4/12 at 7pm.

Based on Otomo's own long running serial comic, the film is about Tetsuo, the runt of a teenage biker gang, whose psychic powers suddenly manifest one night during a gang fight. He is taken away by a secret government agency in charge of other children with psychic powers, while the gang's leader, Kaneda, sets off to rescue his friend before it's too late.

Basically, every metaphor you could ascribe to the X-Men, you could also ascribe to Akira. Loneliness, alienation and being an outsider are covered here by immense, uncontrollable psychic powers instead of immense, uncontrollable genetic mutations. Akira, however, takes it further emotionally, while X-Men often seemed to get caught up in soap operaish side stories of who loves who. There are no standard heroes in Akira.

I gave the Bluray a spin last night and it looks flawless.

The film will be screened in the original Japanese with English subtitles. It's actually easier to understand what's happening in the film with subtitles, no matter how attached to the original English dub one may be.

Try and RSVP if you can, so the Virgin Olive Market will stay open late.