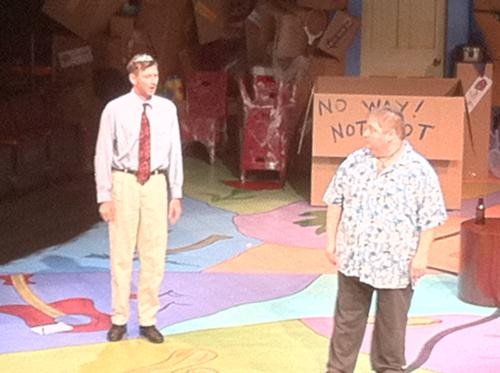 Do you love deadlines, thrive on pressure, and enjoy being creative under a time crunch? Then Play-in-a-Day may be for you. On Monday, April 11, members of Orlando's theater community gathered in the Orlando Shakespeare Theater's Margeson stage to see the results of this year's 24 hour play-creation marathon.

This was the fifth consecutive year that the event, which has been around Orlando in various forms for about a decade, was presented by Orlando Fringe producer Beth Marshall as a fundraiser for Playfest!, The Harriett Lake Festival of New Plays.

As in past years, a secret theme (this time it was “theater history”) was revealed on the evening prior to the performance, and each of the six participating playwrights were presented with a randomly-chosen genre to compose in. That gave them just one night to write an original ten-minute script, which was taken up the following morning by a team of actors and directors. After only one day of rehearsal, the shows were performed – complete with sound, lighting, costumes, and props – merely 24 hours after they were conceived.

This year's crop of insta-plays included:

So Close To Me by Kenny Babel

A sweater-vest-wearing theater professor (John Connon) and seductive undergrad (Smantha Faith O'Hare) go searching for Julius Ceasar, and end up in a avaunt-guard psychsexual battle with a n 80's “Rock Me Amadeus.”

Theatre is History by Mark Brown

A CSI spoof with a bad cop (Tony Robinette)/ stupid cop (Emily Killian) interrogating a witless witness (Nicole Carson) about the murder by neglect of a fabulous invalid.

An ingenue (Britni Leslie) being sexually exploited by a sleazy producer calls on her theatrical godmother Nell Gwyn for salvation, but the legendary Restoration actress unexpectedly advises her to just relax and think of England.

In the night's funniest piece by far, a fastidious pageant fan(Eric Pinder) and a lecherous gambler (Brett P. Carson)  judge a beauty contest cruise when the participants are actually prostitutes.

Packing Up and Shipping Out: An Intergalactic Romantic Musical on Ice by David Lee

Play-in-a-day's most absurdy autobiographical play featured Josh Geoghagan as the playwright, arranging his real-life move up to New York with an aggressivly inquisitive packing company employee (Olivia Horn). This one was especially poignant for me, since I plan on moving into Lee's old house once he leaves in June.

Theater is Dead by Janet Allard

The only piece written via phone by an out-of town playwright starred Sarah Lockard and David S. Monge as officiants at a mock-gothic funeral for dearly deceased drama.

Ok, so you're unlikely to see any of these shows in an anthology of classic short plays. But I go to Play-in-a-Day each year for the same reason other people go to the circus or Nascar – to see someone doing something dangerous that I'm scared to do myself. This year, despite some misteps, no one completely fell of the tight-rope, but it's exciting just to watch them take that risk.