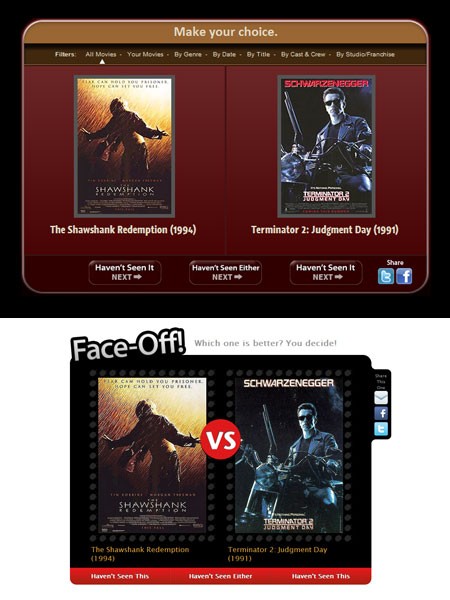 Last week, movie-news site MovieWeb premiered a brand-new addition to its site, in which visitors can vote on the better movie of two that are randomly generated, the result being the visitors' own personal "best-ever" movie list. They can compare their list to a global ranking system, share their picks on social networks, etc. It's called Face-Off!

Sound familiar? Yep, that's pretty much the concept behind Flickchart, a locally based website founded by Jeremy Thompson and the Pauses' Nathan Chase, a site so addictive I felt compelled to write about it a year and a half ago and which has since gained a devoted following, including a fan-run podcast.

A few days after Face-Off!'s debut, Flickchart responded in kind. Their lawyer sent a statement of intent (or cease and desist or whozeewhatzee) to MovieWeb on April 21 and their website announced that Flickchart plans to sue MovieWeb for "infringements of our intellectual property rights, their breach of contract of our terms of service, and indication of their unfair competitive practices."

You can look at the full letter, along with side-by-side comparisons here.

Chase was not legally permitted to comment, but Flickchart is posting updates as things progress, so stay tuned.