A Boy's Best Friend is His Mother 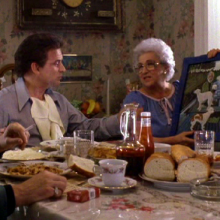 As you might've noticed this weekend when you went to see Thor, the movies have long been a place for directors to work out their daddy issues on screen for the world to see. We are essentially a patriarchial society afterall, and we have an overwhelmingly male director force, who all have something to prove to dads that they could never make laugh, or never impress, or who were never there to begin with.

Along the way we got some memorable mommies, too. Some directors dealt with their mommy issue with complex comedic webs, like in the Albert Brooks film Mother, or Carrie Fisher's autobiographical Postcards from the Edge. And of course some went the complete other way, like in Mommie Dearest or Psycho.

And then there was Livia Soprano, who would get her own chapter.

But anyway, these are just of a few of the ones that stayed in my mind over the years:

Mamma DeVito (Catherine Scorsese), Goodfellas: She only had four scenes in the entire film but left the mark of a featured player as the mother of psychopath Tommy DeVito. The director's mother has played the Mamma ____ part in many of his films, going back to the first scenes of Whose That Knocking at My Door, and even played Mamma Scorsese in the early Scorsese documentary about his parents and growing up on Elizabeth Street, Italianamerican. She feels like more of a grandmother than a mother, but she's still a grandmother I wish I had.

Beverly Sutphin (Kathleen Turner), Serial Mom: As someone who worked in a video store growing up, seeing the old lady stabbed to death for not rewinding her tapes was one of the most satisfying scenes in cinema history. Who wouldn't love a mom who would do such a thing for you? Okay, she's a little nuts otherwise, but on balance, I still think she wins.

Annie Sullivan (Amy Madigan), Field of Dreams: Annie gets the shaft a bit in Field of Dreams (certainly not in the good way), as she is left behind to deal with the bankrupt farm and shark brother (Timothy Busfield) while Ray (Kevin Costner) goes off to find Terrence Mann (James Earl Jones) and Archie Graham (Burt Lancaster), but she makes a deep, lasting impression before the roadtrip begins when she stands up and argues with (destroys, really) the closeminded and tight anused PTA about banning The Boat Rocker, by Terrence Mann. She successfully rallies the sane-minded members of the meeting into not being fascists and, really, she never has to do anything again in her life and she would still end up on the "awesome" side of the ledger.

Evelyn Wright (Cloris Leachman), Spanglish: There is much to learn from this aged former folk singer, and much of that wisdom comes from the many mistakes she's made in her life and the songs she wrote about those mistakes. But whether you need wisdom, someone to cry in front of or a swift kick in the ass, she's there. Her most heroic moment in the film is when she tells her daughter, Deborah Clasky (Tea Leone), who is leaving for a rendezvous with another man, that her low self esteem is just good common sense. How many mothers in the world are that honest?

Mr. Mom (Michael Keaton), Mr. Mom: C'mon, he looks damn good in that plaid shirt, even if it could stand up on its own.