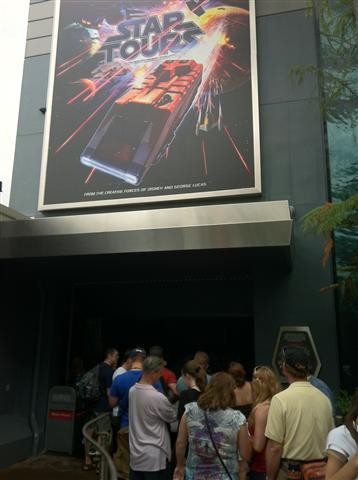 A long time ago (1987, to be precise) in a theme park far, far away (Disneyland), the Star Tours ride introduced flight simulator technology to the amusement industry, taking millions on a hyperspace journey to George Lucas' Star Wars universe. Last year, after over two decades of operation, the popular ride was powered down at Disneyland and Orlando's Disney Hollywood Studio in preparation for a major overhaul. On Saturday May 14th at 2:35p.m., the Florida version of the attraction reopened for a brief “soft opening” test, giving a few thousand lucky guests (this author included) the chance to be the first to experience the newest version of this intergalactic adventure.

You'll have to wait until after May 20th (the ride's official grand re-opening date) to read my full review. But in the meantime, I'm happy to share the bottom line – it's spectacular, not to be missed – and give a few spoilerish tidbits from my journey to Endor.

P.S. Want to ride yourself, and can't wait for the grand opening? Follow @StarTours2Live on Twitter for up-to-the-second updates on when the attraction is "soft open."