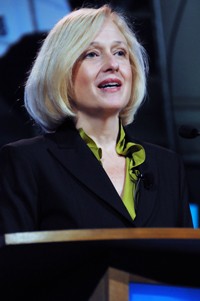 Just because no one from WMFE was on the list of attendees for the PBS annual meeting taking place at the Orlando World Center Marriott this week doesn’t mean their presence (or perhaps lack of presence?) wasn’t felt.

In her opening remarks this morning, PBS President and CEO Paula Kerger mentioned that “the sunny Orlando skies darkened a bit” when WMFE suddenly announced that it was planning to sell its TV station to Christian broadcaster Daystar Television Network for $3 million.

Kerger, whose welcoming remarks were upbeat and positive and focused mainly in the progress public television has made in the past years rather than the obstacles facing it, said the WMFE situation “brought out the best in our system,” noting that other Central Florida PBS stations are “now discussing a number of potential approaches to meet the shared goal of ensuring that viewers in Orlando continue to be served.”

Later, in a Q&A with public broadcasting’s national leadership, Jeffrey Brown, senior correspondent for PBS Newshour, alluded to the WMFE situation again, asking panelists what it means for the PBS model of broadcasting when member stations decide to opt out and move on. “Can PBS survive?” he asked. “Even more fundamentally, should it?”

This being the PBS annual meeting, the prevailing sentiment was, naturally, that the model should survive; but it seems that survival, at least in some markets, may mean adapting. Kerger and others alluded to the announcement by southern California flagship PBS station KCET in October 2010 that it would opt out of PBS membership as of January 1, 2011 because it could not come to a compromise with PBS about a reduction in its membership fees and programming flexibility. Unlike the situation in Orlando, KCET was not trying to sell its station – rather, it now operates as a locally owned, independent, nonprofit station – but Kerger and others point out that the community of PBS stations in the area banded together to fill the void in PBS programming left when KCET went independent. Huntington Beach station KOCE rebranded itself PBS SoCal and took on the role of being the full-service PBS station in the region, while other stations in the region have picked up additional PBS coverage as part of a Southern California consortium of PBS stations.

The future of PBS in Orlando could take a similar turn, though it’s up to the local stations that still exist here – WDSC in Daytona and WBCC in Cocoa – to determine the best course of action and come up with a plan. According to PBS spokeswoman Jan McNamara, PBS is a “station-based” system, so the national organization can’t make the decisions or insert itself into the process. “We did some work with PBS SoCal to help facilitate that transition,” she says, “but the bulk of that transition was the hard work of the local stations themselves.”