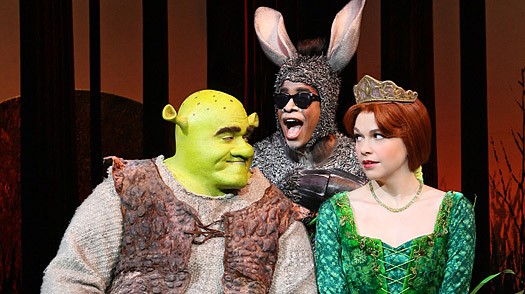 Here we go again. Another beloved big-screen comedy turned Broadway musical has made its way to Orlando's Bob Carr. Just like Monty Python's Spamalot, this one is another scatalogical spoof of medieval fantasy icons. Just like Mel Brook's Young Frankenstein, this one stars a not-so-jolly green giant, and was booted off Broadway far sooner than its big-money backers would have liked. So, just like its aforementioned antecedents, Shrek the Musical is bound to suck, right? Here's an ogre-sized surprise: Shrek not only isn't as awful as expected, it's actually awfully entertaining.

In case you've been living in a swamp for a decade, Shrek is based on the 2001 DreamWorks CGI cartoon,which in turn was based on William Stieg's storybook. Shrek (Eric Petersen) is a misanthropic monster whose home is overrun with fairytale characters evicted from Duloc kingdom by napoleonic Lord Farquaad (David F.M. Vaughn). With sidekick Donkey (Alan Mingo, Jr.) in tow, the ogre offers to rescue Farquaad's intended Princess Fiona (Haven Burton) from a fire-breathing dragoness (Carrie Compere) in exchange for his privacy. The odd couple falls in love, a magic curse is broken, and everyone (except for Farquaad) lives happily ever after – or at least long enough to sing some Neil Diamond.

The musical's success lies with the smarter-than-average book and lyrics by writer David Lindsay-Abaire, better known for his harrowing Pulitzer-winning play Rabbit Hole. The script follows the first film, ignoring the increasingly sub-par sequels (except for a quick cameo by Puss in Boots) and eschews the movie's now-dated pop culture references in favor of lampooning Broadway icons (look for pokes at Gypsy, Lion King, Wicked, and Les Miz). Some memorable film moments, like the “onions have layers” exchange, are recreated, but the bulk of the dialogue is original and an improvement on the screenplay. Lindsay-Abaire's book also develops back-stories for the leads, lending more dimensionality than they had on film, and injectsa queer-liberation subtext embodied by puppet-in-denial Pinocchio (Blakely Slaybaugh) and a cross-dressing “hot tranny mess” Big Bad Wolf (Jason W. Shuffler). But fear not, fans of the original's flatulence jokes; there's an extended fart-off in Act 2 to keep you happy.

Shrek also benefits from Tim Hatley'sscenic and costume designs and Hugh Vanstone's lighting, which strike an amusing balance between high-budget (turntable floor and super-sized projections) and low-tech (an impressive rod puppet dragon, furry shoes for a rat chorus line). Last but not least, the energetic cast is obviously working to sell not just the humor, but also the humanity of their characters. Eric Peterson's Shrek (with an assist from Naomi Donne's makeup) is more soulful and empathetic than Mike Myers'; Alan Mingo, Jr.'s Donkey is less grating than Eddie Murphy's; and Haven Burton brings a spastic spunk to Princess Fiona that Cameron Diaz didn't.

Everything isn't perfect in Far Far Away, unfortunately. For starters, while the score thankfully eschews the movie's Smashmouth-heavy pop soundtrack, Jeanine Tesori's music makes a serviceable support for Lindsay-Abaire's witty lyrics but is other entirely unmemorable: the next morning I'm unable to hum a single tune. It didn't help that Bob Carr's challenging acoustics conspired with Petersen's booming baritone to make everything unintelligible during the handful of moving ballads.

Likewise, the direction by Jason Moore & Rob Ashford is workmanlike but uninspired: the blocking is largely two-dimensional, the second act pacing sags, and a couple climactic effects are clumsily conceived. An exception is the execution of diminutive Farquaad; the image of David F. M. Vaughn dancing Josh Prince's choreography entirely on his knees is burned in my brain.

Flaws aside, though the squirming tweens in the seats next to me thought it was too long, Shrek received a rapturous response from the rest of the audience on opening night. It probably doesn't hurt that this is a show built for Orlando, featuring shout-outs to Epcot and Typhoon Lagoon, along with the much of the Disney-skewering found in the original film. By not making me turn green as I feared, Shrek (like Rock of Ages earlier this year) pleasantly proves yet again that you can't judge a show by its cover.