Food not Bombs violates city feeding ordinance (for real this time), police do nothing, city says nothing 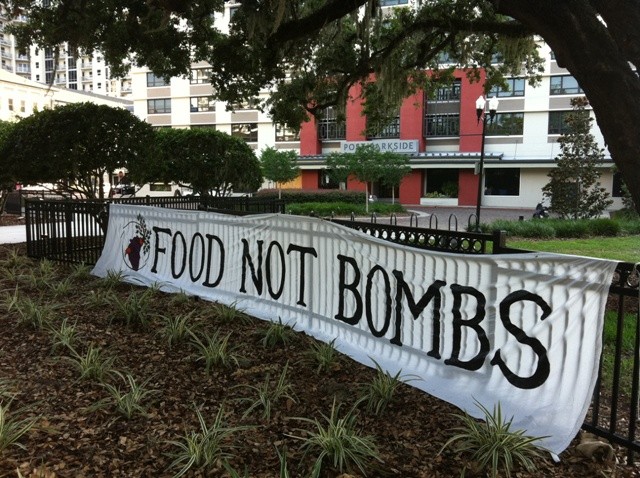 If you’ve read Happytown this week, you know that Food Not Bombs, a politically charged group that serves vegetarian food to the homeless every Wednesday evening and Monday morning, announced on May 18 that they would purposefully risk arrest by feeding the homeless at Lake Eola Park in violation of the city’s newly reinstated group feedings ordinance. The city’s ordinance, upheld by the Eleventh Circuit U.S. Court of Appeals on April 12 after a drawn-out legal battle lasting nearly five years, requires any group holding a food sharing which attracts 25 or more people at a public park within two miles of city hall to apply for a permit from the city; groups are only allowed two permits at any one park within that two-mile radius per year.

Yet when Food not Bombs commenced its feedings sans permit last Wednesday, the city essentially forced a permit upon the group. The following Monday morning, the city gave the group its second permit, which, again, it had not asked for. Organizers suspect that the city didn’t want to enforce the ordinance under glare of the media spotlight--after all, the May 18 sharing featured a local news helicopter hovering above the park--but city spokesperson Cassandra Lafser told the Weekly that the city was just “being very proactive in assisting them in complying with the ordinance.”

By yesterday evening, however, Food not Bombs had already been allotted its yearly permit limit for Lake Eola, so the Weekly was present to witness the city’s enforcement of the ordinance at the routine sharing. But alas, nothing happened. The event proceeded quietly and uneventfully, and save for the reporters milling about and Copwatch’s John Kurtz filming the proceedings, nobody other than the homeless and Food not Bombs volunteers arrived at the scene.

“Their strategy is to wait until the media and the public have lost interest, then swoop in to arrest people,” said Ben Markeson, a longtime Food not Bombs member. “We’ll see if that works,” he said. “I don’t think it will.”

The city did not reply to a request for comment.