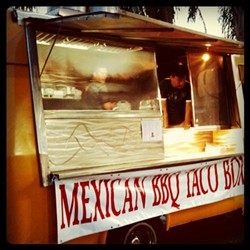 As I write this, I've just finished an excellent spicy pork taco from a yellow truck with a red-and-white banner, parked in the Citgo lot at Primrose and Colonial: the Mexican BBQ Taco Box.

That's right ... the MEXICAN BBQ Taco Box. I can only guess that "taco box" is some kind of generic food truck term-of-art, because their menu claims "The Best Taco Box In Town," which is kinda throwin' down the gauntlet to their Korean food-truck brethren otherwise.

This was the first day serving in Orlando for the owners, who came here from Fort Worth, Texas. The menu has five sections: "Quesadilla Taco Box," "Burrito Taco Box," "Fajitas Taco Box," "BBQ Taco Box" and "Mexican Taco Box"; proteins include chicken, carne asada and a very tasty al pastor. Nothing on the menu specifically for the vegetarians, though if you're not too picky about the grill also having meat on it, they might make you a taco or quesadilla with fajita vegetables. They make their own tortillas (see picture of the press, below) and I can testify that it makes a difference. They also make their own avocado/lime/jalapeno and habanero sauces, and they plan to serve house-made escabeche (pickled vegetables) and possibly horchata soon as well.