Orlando's Mills 50 District – otherwise known as the business district surrounding the intersection of Mills Avenue and Colonial Drive/Route 50 – is known for its bars, clubs and local restaurants. Now it can be noted as a street gallery of sorts for local, upcoming artists. 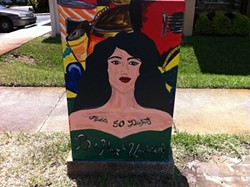 Selected local artists have transformed the transportation utility engineering boxes (also known as the big, ugly metal boxes often seen at intersections) around the district into colorful works of art.

The nine freshly painted “art boxes” can be found at various intersections near Mills Avenue and Colonial Drive.

Local artists from Orange and Seminole counties were encouraged to send sketches and slides of their work in the hopes of being selected to take part in the project. Entries had to include the words “Mills 50” and designs for all five surfaces of the utility box.

Selection was finalized based on a five-point system that rated the artist’s “overall aesthetics and design,” according to the Mills 50. One point was lost if “Mills 50” was omitted, and one point was rewarded if the artist was local (that is, based within the Mills 50 District boundaries or within three miles of the intersection of Mills Avenue and 50).

Artists were selected during the first week of May by a panel of judges from both Mills 50 District and the City of Orlando. A few of the judges were Curtis Carswell, owner of the Great Escape Art & Frame (located in Mills 50), Frank Holt, former Manager of Public Art for the City of Orlando and current executive director of the Mennello Museum and Sarah Kelly, former Chair of the Downtown Development Board and member of the Public Art Advisory Board.

Selected artists were given $100 for paint and material, as well as a $100 gift certificate to any Mills 50 District businesses.

“The purpose of the project is to create an environment which depicts the community’s diversity, creativity, commerce and neighborhoods,” said Joanne Grant, executive director of Mills 50. The main goal is to “beautify the District.”

If you haven’t caught sight of the “art boxes” yet, not too worry. Mills 50’s contract with the City of Orlando to beautify the boxes doesn’t have an expiration date, so they should be around for a while.