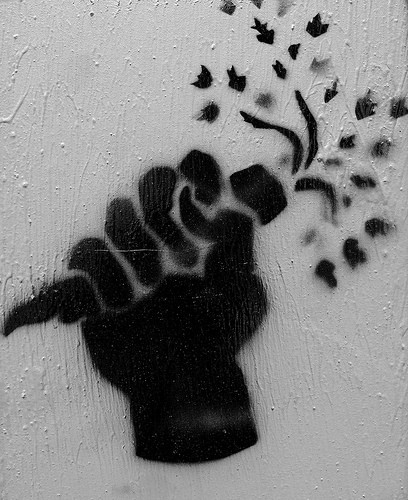 Both Cross and Markeson tell the Weekly that there were roughly 10 volunteers sharing food at the scene when the arrest occured. They believe that only themselves and McHenry were arrested because they were a constant presence at the sharing, and hence, police could safely identify them as group members. "I think more people would have gotten arrested if certain other people were there, because [the police] have been clearly monitoring the food sharings," Markeson says.

Judging from various reports of the incident, there were no local news outlets at the scene when the arrests occurred--which, to Cross, is not a coincidence at all. “There was no media there at the time, which is exactly what they were waiting for,” she says.

OPD spokeswoman Barb Jones writes to the Weekly that only Markeson, Cross, and McHenry were arrested because they were the only ones breaking the law: "They were the ones in violation of the ordinance...no other violations."

Yet Food not Bombs begs to differ, and has scheduled a press conference for 4:15 this afternoon in front of the jail booking center on 33rd Street--stay tuned for more details in next week's Happytown™.