Primetime TV: Where 7% of the pasta holds on.

For inside-TV nerds like myself, this month's New York, featuring Amy Poehler on the cover – looking weirdly like Kristen Chenoweth, who herself looks weirdly like a panderer these days – is a gold mine. Of course, you have the Chris Colfer piece in which he comes off – unfairly, I think – as a bit of a prima donna, and the 1,234th piece on what a great deal Louis C.K. has with FX, and a depressing article on how The Walking Dead's success has turned AMC into dumbed-down hogs and a surprisingly (probably highly edited) cohesive essay by Roseanne on the hellish, misogynistic working environment that was the first season of her show (until, of course, some mass firings and the addition of Joss Whedon and Judd Apatow, the careers of whom the domestic goddess is happy to take credit for, maybe rightfully).

Perhaps most interestingly – and that's really saying something – is a two-page, mini-print spread by Josef Adalian called "From Script To Show." Adalian has culled (and hilariously boiled down to single-sentence pitches, like "Adult siblings and their relationships") all 429 scripts purchased by the four main networks – ABC, CBS, NBC and Fox – this year. He then highlights which of those scripts later became pilots.

He then boils down some key, creatively heartbreaking stats: 59 of the 429 scripts are about cops and/private eyes; 24 are medical dramas; five scripts bought by ABC alone are about manly guys befuddled by the contemporary world of women.

The addictive website Texts From Last Night became a script, though a pilot wasn't ordered. So did Awkward Family Photos.

Tough biz. You have no idea.

Now that the major networks have announced their primetime schedules, I went through Adalian's exhaustive list and put a checkmark by the ones that made it on the air.

CBS was by far the stingiest net – they ordered exactly two (2) new comedies from the list, "Two Broke Girls" starring Kat Dennings and "How to Be a Gentleman", an Odd Couple-esque sitcom starring Matt Dillon's brother. In the drama department, they ordered three: "Untitled Susannah Grant Project", directed by Jonathan Demme and now called "A Gifted Man," a cop show exec produced by Robert DeNiro and starring Leelee Sobieski that was called "Rookies" and is now called "The 2-2" (I know.) and also the new JJ Abrams, naturally. Interestingly, they also ordered a pilot for that new Sarah Michelle Gellar show, "Ringer," but apparently sold it to the CW.

7.7%. That means 92.3% of the shows with enough potential to be bought by a major network did not become a real show.

So does that mean the network selection process is much more impossible than outsiders previously believed and that the grueling competition, combined with countless focus groups, studio notes and reshoots means we're seeing the cream of the crop? Hardly. Around this time a year ago, NBC was plenty jazzed about its upfront survivors. Y'know, shows like "The Cape," "The Paul Reiser Show" and "Outlaw." 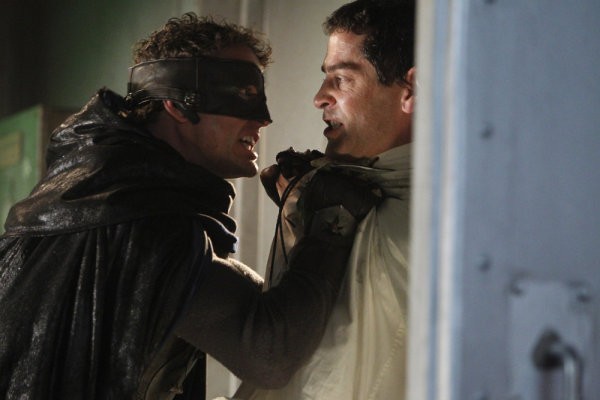 CBS was just as picky last year, and apparently nailed it with "Hawaii Five-O" and "Blue Bloods," but just as easily screwed the pooch on "The Defenders" and "Shit My Dad Says."

So go forth, young writers, and pitch away, dreaming that you'll be among the 7.7%. That's if you can get a pitch meeting with a major network. Wonder what the stats are on that?

–TV writers Sam Ernst and Jim Dunn ran a podcast called Sam and Jim Go To Hollywood from 2005-2008 documenting their stomach-churning battle to go from successful Midwestern restauranteurs to TV writers. The sessions were always informative but usually depressing as hell as they laid out the details and nuances that go into getting that pitch meeting and hoping the script will even be bought, let alone the super-small chance it becomes something. But know this: There's a happy ending. Today, Sam and Jim are the showrunners on SyFy's "Haven," which has been renewed for a second season.