Photo Preview: "Guitar: The Instrument that Rocked the World" at OSC 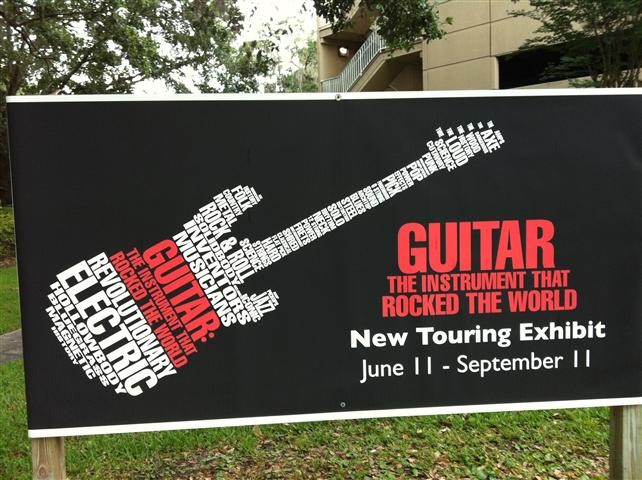 If you don't think “hard rock” and “hard science” sounds like a peanut butter-and-chocolate combo, the Orlando Science Center is ready to rock your world – educationally speaking – with their latest exhibit. “Guitar: The Instrument that Rocked the World” has its world premiere tomorrow (June 11) at OSC, and will remain as the Loch Haven institution's headliner through September 11th. From here, this new collection assembled by the National Guitar Museum will travel to 15 cities over the next 5 years, before finding a permanent home in a yet-to-be-named location.

Part art gallery, part hands-on playground, the exhibition explores the history of strummed string instruments from ancient acoustic instruments to space-age electronics, with an emphasis on the golden age of the electric guitar. Along with the dozens of guitars displayed behind glass, there are a number of interactive attractions on the science of sound, including a Guinness Record-breaking 43.5 foot long playable guitar.

I snuck inside the exhibit this afternoon with Jeff Stanford, OSC's VP of Communications, as installers were rushing to complete the displays in time for a private preview party tonight featuring legendary Byrds guitarist Roger McGuinn. As Stanford says, the center is seeking to “take things that people already find interesting and show them the science in it.” He predicted “Guitar” will have an older-skewing crossover appeal, similar to the popular “Bodies” anatomical display OSC hosted, and should attract music fans and art admirers along with the usual families.

Here's a photo gallery of a few of the unique instruments on display.