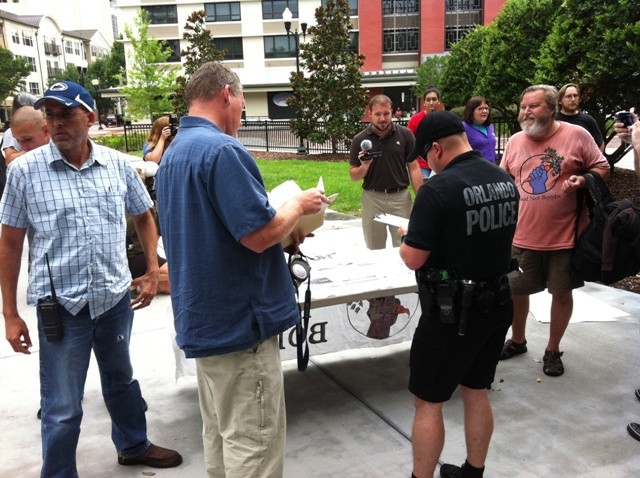 Six more activists affiliated with the group Food Not Bombs were arrested yesterday at Lake Eola Park for providing food more than 25 people (36, to be exact) without a Large Group Feeding permit from the city of Orlando. Some of those 36 people were members of the group themselves, as the feeding suffered a smaller turnout than Wednesdays past—whether it was due to the inclement weather, or the habitual police presence at the park, was unclear.

The arrests bring the number of those booked into jail for violating the ordinance to 21 since the city started its crackdown on June 1. Those booked into the Orange County Jail yesterday evening from the Food Not Bombs event were David “DJ” Antolic, 24, James Dunson, 26, Cristine Field, 54, Jimmy Lease, 21, Bradley Valenzuela, 21, and Matt De Vlieger, 26.

Lease and Dunson were from the St. Petersburg chapter of Food Not Bombs, De Vlieger is a longtime local activist and organizer, Field is an accountant who was involved with the apparently defunct women’s peace group CodePINK Orlando, Antolic is homeless, and Valenzuela’s affiliation is unknown.

Prior to the arrest, a handful of the 15 individuals who had already been arrested over the past two weeks—including Keith McHenry, cofounder of the international Food Not Bombs movement—were inside the park, despite having trespassing warrants. This was legal at the time, because their warrants had allowed them to enter the park if they were exercising their First Amendment Rights to free speech. (Though the Eleventh Circuit U.S. Court of Appeals’ decision in April upheld the city’s ordinance, it also affirmed that the group’s politically-charged food sharings are expressive conduct protected by the First Amendment.)

But yesterday, the trespassed were served with revised warrants that no longer included that exception clause, and so the majority of the members trickled out to the corner of Osceola Avenue and Central Boulevard, just outside the park boundaries, to hold signs and hand out literature.

The local media’s appetite for the controversy is waning. There were no local news stations present yesterday, nor was the Orlando Sentinel in attendance, as it had been for the prior few events. A look at the Sentinel’s editorial last Thursday, which supported the city’s enforcement of the ordinance, may bear some explanation: “Orlando Food Not Bombs serves free meals to the hungry, but it also has skillfully capitalized on the media's voracious appetite for controversy.”