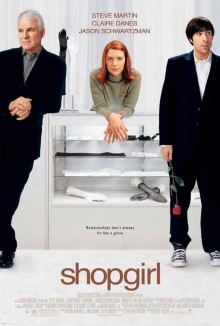 Before it came out in 2005, Shopgirl was poised to be a hit. It starred three name brand actors in Claire Danes, Jason Schwartzman and Steve Martin (who also wrote it), and seemed to have the right pedigree of being based on Martin’s successful novella of the same title. The trailers and stills had an air to them that seemed to recall the young girl making it on her own screwball comedies of the 1940s, the kind of stories that might have had Margaret Sullivan or Ginger Rogers playing the shopgirl.

In it, Claire Danes plays Mirabelle Buttersfield, a pretty but cloistered girl who has moved to Los Angeles from Vermont to try and make it as an artist. Like most people who move with that goal in mind, she hasn’t made it yet, or even come close. She lives in a small apartment with her cat and her meds, working days at Saks Fifth Avenue selling evening gloves, which are in about as much demand as her artwork.

Doing laundry one night, she meets Jeremy (Jason Schwartzman), an oddball starving artist who designs fonts and does logos for an amplifier company. Lonely and in need she agrees to a date with him, but ends up unfulfilled at the end of a long night. They are roughly the same age, but Mirabelle has long since passed Jeremy’s emotional age, and they are unable to make a connection, despite both grasping for one.

Enter Ray Porter (Steve Martin), the charming and successful computer mogul whose home high up in the Hills has a distant view of Mirabelle’s lowly Silverlake apartment. Ray is a different sort of guy than Mirabelle is used to – for one thing, he’s a man, not a boy. He’s accomplished, professional, and can make gestures, like paying a student loan, that are small to him, but huge to someone scraping by. He woos her as if she were the only woman he’d ever though about, and does it the old fashioned way. In contrast to Jeremy, it takes a few dates to end up back at Ray’s place where she is finally shot of her frustration.

But he travels for work a lot and he’s not looking for anything long term, which she says she understands, though she does a little bit of mental editing on, where he is not being entirely serious when he says this.

Jeremy, in turn, heads out on tour as roadie for a band fronted by The Red House Painters and Sun Kil Moon front Mark Kozelek (who might look familiar from Almost Famous where he was a member of Sweetwater). It's a journey of self discovery for Jeremy -- one sort of forced on him by Kozelek, who plays a bit of a guru for Jeremy. It's slow going, though. It's a long process and he's got plenty of maturity issues to work out. Simple things like owning a suit seem out of touch for him as he begins.

The film itself almost finds itself stuck in the emotional mode of 1940s films at some points, which is both a plus and minus. It’s a whimsical notion, and director Anand Tucker has fun exploring old fashioned joyous things like evening gowns, Love-in-the-Afternoon/Sabrina style relationships and simple, basic ideas like charm and grace that movies today just don’t have. But it's interrupted so often by the modern real world of depression meds, private jets and voice mail, though, and the two worlds don’t mesh harmoniously to the point where you’ll find yourself wishing the film had just taken place in the golden age of Hollywood instead of 2005. Tucker never gets anything huge wrong, but the little things he does need a little mental editing of your own (something I found I did rather successfully when talking about the film with a friend and forgetting all about Mirabelle’s friends, and Bridgette Wilson-Sampras’ role). Danes’ turn as Mirabelle makes the mental editing entirely worthwhile, though. It’s not quite the part she was born to play, but it’s a part that only she could have played right. Her slender physique and non-assuming persona plays perfectly against Jeremy’s clueless (but growing!) aloofness and Ray’s dominant aloofness. She is elusive, it turns out, despite wishing to throw herself at both of them. Life, sometimes, has other plans.

It's a difficult film to place in the Steve Martin filmography (much like his Silas Marner adaptation, A Simple Twist of Fate) because it's not funny, and it's not meant to be. Like his previous novellas, it’s meant to be charming and witty, but your sides will be firmly intact. The film means to kiss your extended hand and tickle your wrist a little with a sly, winning smile, and it does that all night long if you let it. It’s just up to you to let it.