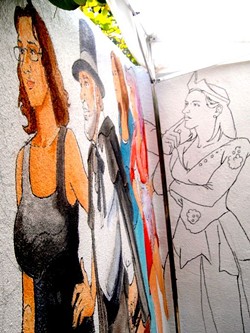 Orlando illustrator/journalist Thomas Thorspecken has a new outlet through which to share his art with Orlando. Thorspecken, who usually files his colored-pencil sketches of goings-on in the arts scene to his Analog Artist Digital World blog, was commissioned by the Mennello Museum of American Art to do a large-scale sketch mural on a 7-by-48-foot wall next to the museum.

Work began on the mural in April, and the project is reminiscent of a recent exhibit hosted by the Mennello called "A New Deal for Artists," which highlighted public art works commissioned by government agencies during the Depression.

According to Genevieve Bernard, curator of education for the Mennello and coordinator of the mural project, she and Thorspecken visited several local high schools to brainstorm with students to get ideas for mural. The students they worked with came up with three themes they thought reflected the city's atmosphere: lines, crowds and diversity.

OK, crowds and diversity ... but lines?

"The students see lines everywhere in this city," Bernard says. "People waiting in line at theme parks, concerts, grocery stores, ATMs and on the roads.”

The end result is a mural of people from all walks of life and in all manner of dress standing in a long line trailing along the wall. Thorspecken used live models who volunteered to be sketched as the basis for the people who appear in the mural. He'll be working on the project until July, and when it is complete, the museum will hold a reception at which the community can view the mural and share thoughts on what it means.