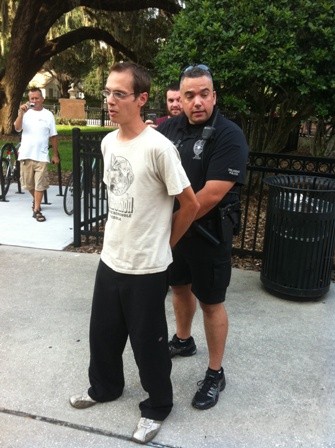 Three people affiliated with the group Orlando Food Not Bombs were arrested yesterday at Lake Eola Park, two charged with violating the city’s Large Group Feeding ordinance, one charged with trespassing. Douglas Coleman, 27, and Allison Estes, 23, were booked into the Orange County Jail yesterday evening after serving free vegetarian food to more than 25 people without a city permit, bringing the number of those receiving the city’s feeding punishment packages—arrest, detention, and trespass—to 23 people since June 1.

Also arrested was the co-founder of the international Food Not Bombs movement, Keith McHenry, on charges of trespassing, roughly 45 minutes before the food sharing.

Though the arrests of OFNB activists have become routine—with the exception of last Monday (when the group did not feed more than 25 people), arrests have been made every Monday and Wednesday since June 1—yesterday’s events were notable for a couple reasons.

It was the first round of arrests made since OFNB’s new lawyer, Shayan Elahi, contended last Thursday that detaining OFNB activists was in violation of a 2003 Ninth Judicial Circuit court administrative order which mandates that after an arrest for a second-degree misdemeanor (such as violating the Large Group Feeding ordinance), the “accused shall be released at the scene of the arrest through the issuance of a Notice to Appear.”  When reached by phone today, Elahi declined to comment on whether he would follow through with the threat to have Mayor Buddy Dyer held in contempt of court for allowing police to continue detaining activists. Instead, Elahi advised the Weekly to attend a press conference to be held tomorrow at 1 p.m. at the city’s designated public feeding location, a fenced lot on the corner of Sylvia Lane. and W. America Street, off of N. Lucerne Circle. (Some OFNB members have referred to this area as the “feeding cage.”)

As for McHenry’s arrest, OFNB members suggested there was some confusion about the boundaries of Lake Eola Park: though the picnic area near the corner of Osceola Avenue and Central Boulevard features a waist-high fence around the perimeter, the actual boundaries apparently stretch further. (See our May 26 edition of Happytown for more examples of City v. OFNB hair-splitting.)

McHenry was among the first arrested for sharing food in Lake Eola Park without a permit on June 1, and says he has been arrested over 100 times in San Francisco for violating similar restrictions on public feeding.