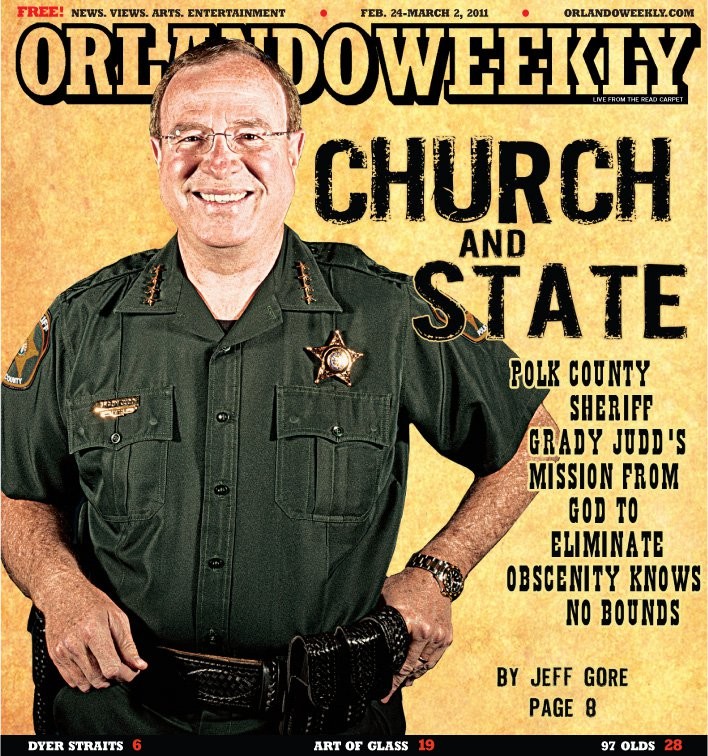 The Ledger reports that the legal coordinator of the group Atheists of Florida, EllenBeth Wachs, is suing Polk County Sheriff Grady Judd, alleging that her own arrest in March on charges of falsely posing as a licensed Florida attorney was in fact Judd’s way of punishing her for her vocal opposition to his religiously-charged brand of punishment. (Last December, Judd had the basketball hoops removed from county jails so that they could be donated to area churches. “You don’t come to jail to have a good time,” Judd explained to reporters.) Wachs’ lawsuit documentation is produced in full alongside The Ledger’s story. She has enlisted as legal support none other than Altamonte Springs attorney Lawrence Walters, who could arguably be described as Grady Judd’s chief professional adversary, given over a decade and a half of various lawsuits between Walters’ office and that of the Polk County State Attorney over Judd's policies. Judd doesn’t just talk about his beliefs – over a span of nearly two decades, he was able to force out every single adult-oriented business from Polk County, a feat which he says is unmatched in any other county of a similar population in the United States. Lawyers like Walters tell the Weekly of heavy-handed intimidation by the Polk County Sheriff’s Office, mostly through the threat of racketeering charges based on the state’s RICO Act. The charges are laid out in further detail in our Feb. 24 cover story, “Church and State,” which profiled the Sheriff and his crusade against pornography. Judd is an unabashed Baptist, and does not hesitate to impart his moral judgments publicly. “There are people in our society that are evil,” Judd told the Weekly in January. “Our job is to protect the good people from the evil people.”