Captains courageous: a letter from home

Both of my mother’s brothers fought in World War II. The older of the two, Artie, took part in the D-Day invasion. The younger one, Bud, was in the Pacific, hopping from island to island on incredibly dangerous missions. 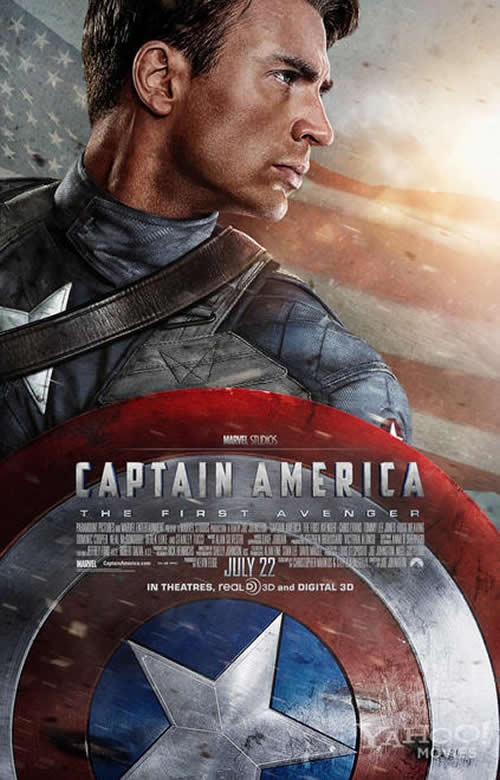 When they returned home, I’m told, Bud talked incessantly about his experiences in the war. It was the only way he could exorcise those demons. Artie, instead, refused to discuss any of it. It had been awful enough to live through, he said. There was no point in revisiting it.

Bud is still living today. Artie died in 1964, just weeks before I was born. To this day, my mother believes that the war killed him. It just took its time in doing so.

I thought of both my uncles all of the way through Captain America: The First Avenger. So for director Joe Johnston and crew, I guess that’s a big “Mission accomplished.”

Understand: This isn’t a perfect film by any means. To cite but one semi-trivial complaint, it follows the leads of most modern superhero pictures by doing everything within its power to avoid showing its hero fully suited up while in the thick of battle. Most such images are relegated to an action-packed montage that feels like a trailer for the movie we should be watching.

But where it succeeds -- splendidly -- is in allegorizing the sacrifices of men like my uncles through the character of Steve Rogers, who is depicted sensitively and insightfully enough to make those sacrifices tangible to a world that’s in perpetual danger of forgetting them.

It’s no accident that, when me meet Rogers, he is politely but firmly requesting that a moviehouse heckler pay due respect to our nation’s men in uniform -- and then getting his ass roundly kicked in return. The film establishes swiftly and reinforces repeatedly that Rogers does not like “bullies,” and that he will not back down from them, no matter what personal price he ends up having to pay.

That’s a brilliant stroke, as it contextualizes the central conflict of the war in terms that are easily understood by today’s generation of lunchroom punching bags and put-upon Facebookers. Yes, the tactic is wholly necessary. Here’s why.

Watching the movie, I realized that I’m in the uppermost reaches of its target demo, age-wise; even though it’s apparently pulling in more viewers over 25 than under, fogey fanboys like me are still a rarity in that we have direct familial experience of the Big One. What little the remainder of its audience knows about World War II is something I’d rather not dwell upon. Suffice it to say that I recently had some online interaction with an otherwise intelligent-seeming fellow who was certain Japan and Germany had not been on the same side.

For viewers with gaps that huge in their historical knowledge, Captain America serves as a stirring remedial lesson. Once upon a time, it teaches, this country was part of a peaceful Free World that was attacked, brutally and without genuine provocation, by forces of pure aggression. Bullies, you bet.

Back to my uncles for a minute: They were drafted as able-bodied, whereas the clearly 4-F Rogers does everything in his power to fraudulently enlist. No matter. Once the weedy little would-be recruit is earmarked for a top-secret experiment that will turn him into a strapping super soldier, his destiny is cemented as the living, fighting embodiment of everything it’s wholly acceptable to glamorize men like them for having been.

This was the Good War, kids, if any can be said to deserve the appellation, and Rogers is Good through and through. As the film charts his path from a human guinea pig to a fearless and inspirational leader of men, it shows us that virtuousness over and over again via an achingly humane series of set pieces. Rogers throwing himself on a grenade he thinks is live, to save everyone around him. Rogers rescuing an entire company of POWs who at that point know him as nothing more than a corny P.R. mouthpiece for the war effort.  Rogers facing down unimaginable evil and refusing to take personal pride in any of it, chalking it up as de rigueur for an ordinary “guy from Brooklyn.”

I’ll risk stooping to the maudlin level of Tom Brokaw here and confess that that’s how I want to think of every single soul we offered up to the putrid god of that terrible war. Men like my uncle Artie, who braved the waters of Omaha because you were supposed to, then bit back on the horror of it all for decades while his memories ate him from the inside. Artie, who my mother swears she could feel looking over her shoulder and into my crib after I was brought home from the hospital. Artie, and the legions of others who never even made it remotely that far. My American family, one and all.

The above paragraph to the contrary, I am not a drama queen. I know not to get upset or take it at all personally when one of my colleagues on the critical left writes, as some have, that Chris Evans’ Cap is an empty suit -- that his genuine and incorruptible patriotism is a trite substitute for the ennui-ridden indecisiveness they seem to equate with character. I just allow myself a moment of smugness by considering where the true emptiness lies.

Likewise, I’m sure it’s easy to misinterpret one of the movie’s most poignant sequences, in which Rogers, his pal Bucky Barnes and their dates visit a World’s Fair-type exposition and learn about the wonders the future will bring. It would be easy to assume that the sequence is meant ironically -- to move us to collectively smack our foreheads and rue the cesspool of dysfunction we’ve instead inherited. It isn’t. The point is that, the occasionally nightmarish evidence to the contrary, we do live in blessed times. Sometimes even magical ones. And if we ever lose sight of that, we need only dwell on what might have been.

If not for Rogers. And Bud. And Artie. And anybody and everybody else who was Captain America.