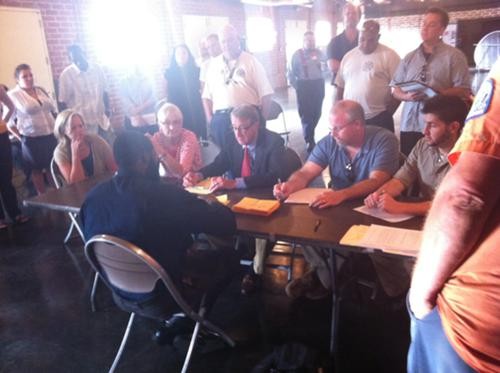 The city of Winter Park today thwarted a unionization effort by some of its blue collar employees after an intense campaign in which the city spent over $10,000 on a "labor relations firm," held four separate meetings warning workers of the perils of unionization, and wrote lengthy letters to workers detailing the futility of forming a public employees union. (See this week's feature, "Union of the Fake," for more details.)

The final vote, tallied roughly half an hour ago, was 32 in favor of unionization, 116 against. The state's Public Employees Relations Commission tallied 159 eligible workers, 148 of whom voted. The American Federation of State, County, and Municipal Employees (AFSCME) would have represented the workers if the majority vote had been yes.

"Obviously, we're pleased with the result," said city communications director Clarissa Howard, who was one of the two dozen people standing around the table where the yellow voting slips were tallied. She added that the city of Winter Park is "looking forward to putting this behind us."