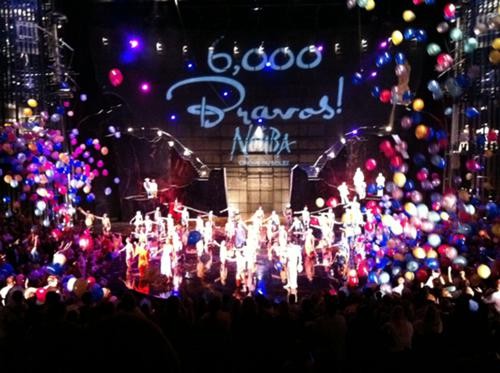 I stopped by at Cirque's invitation to check out the festivities, which began with a flock of costumed performers meet-and-greeting with guests waiting in front of the theater. I found myself drawn to the free demonstration of “diablo,” a kind of juggling yo-yo controlled by hand-held sticks. Shockingly, I was able to get the thing spinning stably for several seconds, and even impressively impel it airborne, though the whole “catching” part eluded me. Needless to say, the odds of me replacing one of the adorable Asian girls who slings these in the show remains vanishingly small.

Speaking of those amazing little performers, they remain on of my favorite acts in the still-excellent show. I've now seen La Nouba at least half a dozen times since it's 1998 debut, and I'm not bored by it yet. Over the years, you begin to notice subtle changes: the diablo-spinners seem smaller and spryer than ever, a costume or two has been tweaked, and about 2/3rds of the original cast members have moved on (though trampolinist Alexander Danilchenko has astoundingly done all 6000 shows).

Two big changes since the last time I saw La Nouba were the addition of 2 new acts: jump-ropers Shoichi Kasuo and Yusuke Funaki and juggler Anthony Gatto. The acts they replaced (german wheels and chair balancing) were among my favorites, but these replacements are both adequate, if not improvements. The Japanese skipping team was inspired to start jumping after seeing the classic Cirque show Quidam; I loved their creepy glowing eyes almost as much as their rope skills. Gatto is a world-class juggler, but aside from the involvement of the “green bird” character as his assistant, his act didn't seem to have Cirque's trademark twisted aesthetic. Plus, the preceding clown interlude now no longer leads organically into the act, as it did with the chair balancing.

Still, these quibbles didn't keep the audience (myself included) from a standing ovation as the cast took a special balloon-strewn bow at the anniversary show's end. If you want to experience it for yourself, $50 tickets are available to Florida residents now through October 29th. This is probably the cheapest seat I've seen Cirque offer, but restrictions apply, and your mileage may vary... call (407) 939-7328 for the details.