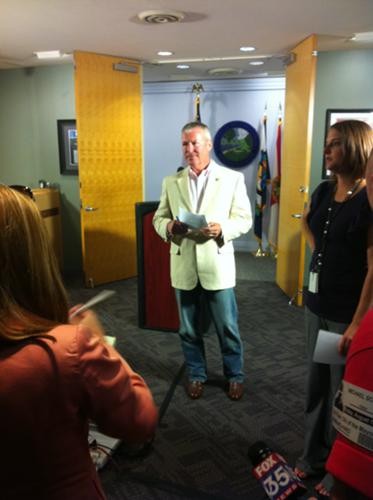 The city of Orlando will drop all criminal charges against the 25 activists arrested for violating the city’s Large Group Feeding ordinance, Mayor Buddy Dyer announced today. Given that the group Orlando Food Not Bombs (OFNB) has been sharing food in front of City Hall without incident for the past two months, the Mayor considers the situation “resolved,” and hence, in “an act of good faith,” nullified the eight trials scheduled for next week.

Dyer has also asked the state attorney’s office to drop charges against the last two activists to be arrested at Lake Eola Park, who were charged with trespassing. Those arrests, based on warrants which were written the instant activists arrived at the park, were the primary reason that OFNB moved its twice-weekly food sharing events to City Hall—trespassing after warning, a violation of state law, carries much stiffer penalties than violating a city ordinance, and the group was already having difficultly in maintaining a steady stream of activists willing to get arrested in protesting the ordinance.

OFNB member Ben Markeson was not impressed by the announcement, despite being one of the members who will no longer face criminal charges, or in his case, steep pre-trial diversion fees. “It shouldn’t be an arrestable offense to share food with poor and hungry people in a public park,” says Markeson. “The ordinance needs to be repealed, period.”

The group’s lawyer, Shayan Elahi, agreed, also pointing out that the City Hall plaza is considered a city park, yet OFNB has been allowed to share food there for over two months (the city has already issued the group two permits for the location, its maximum allotted for the year) without consequence. “The mayor doesn’t get to decide where he allows someone to break the law,” he says.

Elahi suspects that the Monday meeting of the Orange County Democratic Party had something to do with the Mayor’s decision: that evening, the group passed a resolution (reproduced below) asking the city to “decriminalize food sharing in city parks.”

Dyer, a Democrat running for re-election next year, said the resolution had nothing to do with his decision. He did say, however, that the city would continue to enforce the ordinance—well, at least at one park in Orlando. “If they return to feeding in violation of the ordinance at Lake Eola

we will arrest them again.”

RESOLUTION OF THE COUNTY COMMITTEE OF ORANGE COUNTY DEMOCRATS

FOOD SHARING IN CITY PARKS AND REFRAIN FROM ARRESTING PEOPLE FOR

WHEREAS, sharing food with the homeless and hungry is a charitable act that should

be commended and supported when done by any individual, organization, or agency.

WHEREAS, such acts of compassion and selflessness must never be criminalized or

WHEREAS, our nation is going through a severe economic recession and the growing

WHEREAS, the passage of this ordinance and its enforcement involving arrests may

reflect badly on Orlando, internationally.  Moreover, adverse publicity about these

arrests may significantly hurt the economy and reputation of the City Beautiful.

WHEREAS, as Democrats, we stand firm in our belief in anti-poverty policies and

expect our elected officials to do the same.

THAT THE DEMOCRATIC EXECUTIVE COMMITTEE OF ORANGE COUNTY,

FLORIDA, REQUEST THAT THE CITY OF ORLANDO, MAYOR DYER, AND CITY

DECRIMINALIZE THE ACTIVITY OF ORGANIZED FOOD SHARING AND REFRAIN

FROM ARRESTING THOSE WHO ORGANIZE SUCH FOOD SHARING ACTIVITIES

FOR THE HUNGRY IN ANY AND ALL CITY PARKS OF ORLANDO, FL.