Mad Men’s Jones not a bitch? Is too!

August 24, 2011 at 3:48 PM
comment
Yesterday, Jared Gilmore was merely my hero; today, I consider him nothing less than a cross between Perez Hilton and a Christian martyr. 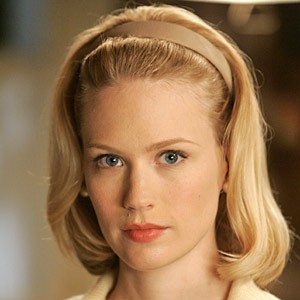 Gilmore is the kid actor who, you may have heard, will not be returning to the part of Don and Betty Draper’s son when Mad Men resumes next year. (If you're looking for something to fill the viewing void until then, read last month's "Missing Men: Ten ways to stay busy until Mad Men returns.") As you may also have heard, he sent Hollywood eyebrows flying even higher than Botox can manage when he told TV Guide that his as-yet-unnamed replacement should “be careful around January [Jones]” -- who, he claimed, is “not as approachable” as the rest of the show’s cast.

“She’s really serious about what she does,” Gilmore said, faux-gingerly. “Everyone else is so nice.”

Well, John Slattery is having none of it. The actor, who plays Roger Sterling on the series, has responded to E! Online that the suddenly-embattled Jones is in fact “a sweetheart,” and that any opinion to the contrary must be rooted in a simple, childish misunderstanding.

“I mean, that’s the character,” he parried.”Betty Draper is an intimidating woman I suppose, if you were a seven-year-old boy or her son.”

OK, let’s get one thing straight right here: Gilmore is 11 years old, not seven. If you don’t know why that’s a big deal, ask an 11-year-old. But what’s especially ridiculous is the way in which Slattery is attempting to cast Gilmore’s reaction as pure naïvete, when everything the kid has said and done so far has shown him to be cunning beyond his years.

First of all, he declined to return to Mad Men because the show could only offer him seven episodes next season, and he had a better commitment from another series. (Dwell on that factoid for a second. Savor it in your mind. He’s eleven. Bruce Wagner couldn’t have written anything better.) Second, he chose to kick one of his co-stars in the ass on his way out, knowing full well that he could get away with it due to the kids-say-the-darndest-things factor. Third, he picked a costar whose talent and personal value system were already a matter of industrywide -- heck, society-wide -- debate. Fourth, he couched said kick in the ass in the most P.R.-savvy terms imaginable: “Not approachable,” as he counted on the TV Guide readership to recognize, is show-biz parlance for “bipolar bitch on wheels.”

(A further detour into the Hollywood dictionary: That definition established, you might assume that “approachable” in turn means “friendly and down to Earth.” But it doesn’t! It means “hopelessly addicted to drugs, and suspects you might be holding.”)

Man, do I love it when a sharp kid makes supposed adults look like asses. Watch for Gilmore to show up sometime soon on The View, crying calculated crocodile tears about the hard lessons he’s learned -- all while dropping “innocent” hints about Slattery’s sexuality.

In the meantime, the real learning here needs to be done by the grown-ups. Slattery has to learn that you never come between a kid and his mother when they’re putting on a slap fight for Hedda Hopper. And Jones needs to learn that you should always be nice to the 11-year-olds you meet on the way up. Because you’re going to meet them again as 12-year-olds when you’re on the way down.