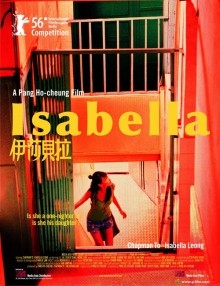 Early on in Isabella, we find thirtysomething Ma Chen-Shing (Chapman To), a moderately corrupt cop on the island of Macau, as he wakes up and finds the girl he slept with the night before, Cheung Bik-Yan (Isabella Leong), on his couch eating a bowl of instant Ramen.

In spite of her apparent young age, his hand slowly finds its way to the back of her head and begins to push downward, but she fights it with a frightened rabbit look in her eyes.

He paid good money for her time, so why was she so hesitant?

The answer, as we find out, is that she is his daughter.

It took me a little while to figure out how to put a defense of this film into words. At first glance -- especially with the shoddy Media Asia subtitles (more on this later) -- the film dips almost into the same territory as Louis Malle's Murmur of the Heart (which, by the way, Wikipedia does not accurately describe the depth of the mother/son relationship in its synopsis). But Murmur of the Heart was nominated for an Academy Award, and it was an honestly deserved nomination, as it's possibly Malle's best film (certainly in his top three). So why should I have a hard time defending a movie where there wasn't actually incest? Why should I even have to defend it at all?

Of course, Bik-Yan isn't the girl that Chen went to bed with the night before. Taking the time to track him down following the death of her mother, she has sneaked into his apartment when the actual girl he slept with left in the morning. She had no where else to go. Unable to pay the rent any longer on the apartment she once shared with her mother, her landlord has padlocked it and she has come the Chen for help.

Chen, for his part, never knew he had a daughter. As a teenager he got a girl pregnant, but thought the girl, Isabella, had an abortion. Chen, though, ran away from the clinic before she'd done anything, and Isabella hid the truth from him despite seeing him often (and often with other women) on the small island.

It's a piling up of misery for Chen at this point, who is about to be indicted for helping mobsters smuggle cigarettes into the country. The film takes place in the late 90s, as Macau was to be handed over to China much like Hong Kong had been handed back to China from Britain in 1997.

As an outsider, it's difficult to say exactly what something like a handover means to people. Being ruled, or administrated, for better or worse is a part of your identity, so intensely for some in Macau that they identify as Macanese instead of Portugese or Chinese. It's something that seeped through the action veneer of Hong Kong films in the run up to their handover by Britain as well, but was handled mostly in a flurry of gun violence and Kung Fu instead of honest drama, as is done here.

But with the handover rapidly approaching, officials are trying to sweep up the corruption and make everything as tidy as possible, which leaves Chen with few options. He can either kill the man who informed on him and risk life in jail, flee or Thailand or serve his sentence for corruption. The arrival of Bik-Yan does nothing to help him make a choice.

In Hong Kong, Chapman To is more known for comedies than dramas, but the movie he may be most known for in America is his dramatic co-starring turn in Infernal Affairs, the Andrew Lau/Alan Mok film that Martin Scorsese's The Departed was based on. He's always been charming, but hard to take seriously in most of his roles. He has a good comedic presence, but Isabella came as a shock to the system for people who didn't realize he had some acting chops. He has a lot of acting chops, honestly. He ends up being almost a poor man's Little Tony Leung, stretching his role into entirely vulnerable areas that you'd never expect of him. His character is all flaw and all vulnerability all of the time. He drinks too much, gambles, smokes, takes up with whores and, as mentioned earlier, is a corrupt cop, though mildly corrupt compared to what surrounds him. It is a snowball effect, it seems. One thing leads to the next and the next, and so on. Chapman To carries all of his on his small shoulders and delivers it right into our laps.

Isabella Leong is a mega-star in the Canto Pop scene, and even tried to break into the American market with a turn in one of the God awful Mummy movies. Needless to say that just like South Korean megastar Jun Ji-hyun before her, it didn't work out as well as it did for Zhang Ziyi. Still, there is something about Isabella Leong's performance here as a teenage in trouble that draws you into this picture fully. If she didn't have that unexplainable "it" factor to her, Chapman To's performance might not have been enough to make the film work. She too is vulnerable, which is nothing new for young girls to portray on screen, but beyond that there is a deepis fragility and naivety to her, but still she tries to make her new situation work. She does for herself what no one else will do any more. It's one of those roles that will probably always be part of the definition of her career, especially in my eyes since I don't listen to C-Pop. She will always be Bik-yan, no matter who she plays. While that might be a great thing for her career, it's a great thing for this film.

Isabella is a beautiful film as much as it's a beautiful story. Pang, his cinematographer and art director capture all of the lushness of the island's Pacific greenery and it's Portuguese architecture, creating a depth of stunning visual texture to lay over the emotional texture.  What might have felt like an awkward love story in less capable hands becomes a story of engage and retreat, connection and disconnection, of isolation and dependence, and of reliance and self reliance.

Isabella is available on DVD from the notoriously awful distributor Media Asia. The disc with the film is all right, but don't bother with the supplements disc, as there are no subtitles (even though the menu is in English). The subtitles lack subtlety and fail in many parts to accurately portray the emotion behind what is being said. One scene in particular, when Chen goes to meet a friend who had dated Isabella after him needs great attention, but the subtitles fail to capture the full gravity of the scene. Watch it carefully, or even watch it twice would be my suggestion.