Two words: goat belly. If it's the last thing you ever put in your mouth, consider yourself privileged. And the food at this gathering of local James Beard Award nominees was certainly to die for. Thirty-three paying customers dropped $275 each for the pleasure of dining on a seven-course meal prepared by Kevin Fonzo (K Restaurant and Wine Bar), Scott Hunnel (Victoria & Albert’s), James and Julie Petrakis (the Ravenous Pig), and Hari Pulapaka (Cress Restaurant). 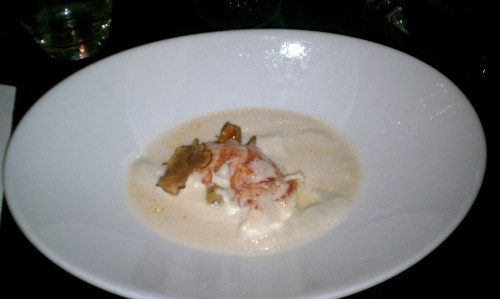 In a night of culinary superlatives, Fonzo's goat rib, goat belly confit and house-made goat-cheese pudding was bloody bleatin' brilliant and came paired with a plush 2004 E&E Black Pepper Shiraz. Not that any of the other dishes were lacking in any way. James Petrakis wowed with an oxtail tortellini crowned with butter-poached Maine lobster, and Pulapaka's amuse-bouche of flaky chicken bisteya served with a spoon of tikka masala ice cream and preserved lemon had me fighting the urge to ask for more.

You'd think with this many cooks (11 to be exact) crammed inside Cress' modest kitchen, a proverbial broth or two would be spoiled. Au contraire. From Hunnel's applewood smoked bison and Spanish octopus to Julie Petrakis' creme caramel with Black Mission fig compote paired with a 40-year-old port, the dishes were memorable and flawlessly executed. An intermezzo after the third course (an outstanding roasted snowy grouper served over a shellfish cioppino treasured with summer truffles) allowed collective stomachs to take a breather, but a blackberry-habanero gelée signaled the restart to what would end up being a three-hour dining affair.

Best of all, more than $13,500 was raised for Share Our Strength through ticket sales and a post-meal auction.

We’ve posted photos of the full menu from the event below. They're the best pictures we could get at the table; not great but still legible for all you culinary trainspotters. 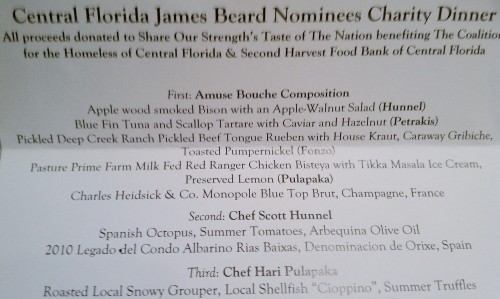