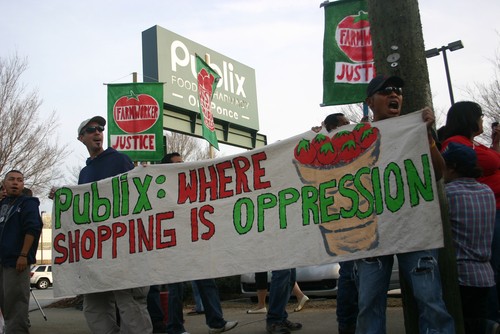 Yesterday, a group of ten people wearing reflective yellow vests arrived at the Lakeland headquarters of Publix Super Markets to request a meeting with company CEO Ed Crenshaw. For these activists and farmworkers, who biked 200 miles from southwest Florida to bring attention to their cause, the ideal scenario would have allowed them to present their case to Crenshaw in person—they would ask Publix to pay an extra penny per pound of tomatoes purchased from Florida growers—then, the group would invite Crenshaw to Immokalee, a largely-Hispanic, unincorporated town 45 minutes northeast of Naples, where the Publix CEO would see the necessity of putting just a little more money in the pockets of the migrant farm workers who live there. That didn’t happen. Instead, according an email missive, the activists were “callously turned away at the gates.” Surely, small groups of activists are ignored by large corporations all the time. But yesterday’s non-meeting was noteworthy given that the group spearheading the campaign, the Coalition of Immokalee Workers (CIW), has earned a name for itself by not only securing such high-level meetings, but extracting agreements from them. Over the past six years the organization, largely comprised of migrant farmworkers hailing from Mexico, Central America, and Haiti, has gotten fast-food mega-corporations like Yum! Brands and food service giants such as Aramark to accede to their penny-per-pound request. In addition, the group brokered a historic agreement with the Florida Tomato Growers Exchange (FTGE) last November which not only allowed these extra pennies to pass into workers’ paychecks, but established an oversight authority to address complaints of abuse by bosses. (The Weekly was in Immokalee for that event, detailed in last year’s feature-length profile of the group, “Harvest of Hope.”) Yet despite last year’s monumental victory, however, the group’s final frontier—the support of grocery store chains—remains largely inaccessible. The CIW has been asking Publix to sign its Fair Food pledge for over two years now, with little to show for the campaign thus far. When reached by email today, Publix spokesperson Dwaine Stevens reiterated the view that the issue was a “labor dispute” unfit for the company’s involvement, and that the company only would pay the extra penny if it were part of the “market price.” (The CIW argues that the premium is indeed "built into" market price.)

Our position remains the same and has been for years. This opportunity/issue of pay is between the employer and it’s workers. We don’t pay the suppliers workers, that is not our responsibility but the responsibility of their employer.

This doesn't have anything to do with Mr. Crenshaw personally. This is a labor dispute, and they are asking us to get involved in something we are not a part of. We don’t plan to meet with this group.

Jordan Buckley, who works for CIW ally Interfaith Action, disagrees. He says that the “labor dispute” argument is undermined by November’s agreement with the FTGE, an exchange which oversees nearly all of the state’s largest tomato growers. He also says he’s been “surprised” at the company’s response, given that its founder, George Jenkins, was known to be more community-minded than the average CEO. “It’s apparent now that it’s a very different Publix,” Buckley says. The CIW and its allies will be meeting later this week to draw up plans for their next move—among the ideas floating around is to utilize the “Publix guarantee,” which begins with the phrase “We will never knowingly disappoint you,” to their advantage. In its scrappier days the group staged hunger strikes to advance their cause, but that action doesn’t appear to be at the forefront of consideration today—at least not yet. “That’s definitely a tool that the CIW has used before,” Buckley says. “I wouldn’t rule that out, but wouldn’t know that it’s necessarily on the top of the list, either.”