September 09, 2011 at 12:21 PM
comment
I feel compelled to point out that the DC Comics relaunch started reaping greater artistic dividends this week. After all, I have a responsibility to certain talkbackers, who seem to be indignant that I don’t treat the subject of mainstream superhero comics with the stone-faced sobriety of Joe Friday reading the Magna Carta. (Good news, fellas: That tumor is benign! Sure is lucky your skin is thin enough for me to see through.) 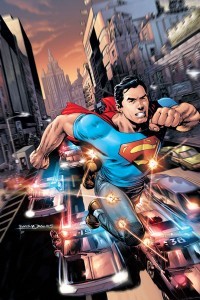 Anyway, the turnaround in DC’s creative fortunes can be keyed to Grant Morrison’s nifty Action Comics #1. I had approached this book with a mixture of hope and trepidation: Morrison is a terrific writer, but the idea of yet again “reimagining” the origins and nature of Superman sounded like yet another maneuver in DC’s never-ending battle to prevent the heirs of character creators Jerry Siegel and Joe Shuster from claiming a fair piece of the pie. To make a long legal brief short, DC’s stance is that they’ve made so many alterations to the character since Siegel and Shuster brought him to their door that Supes is now the company’s own “creation.” (Among the myriad sane responses to that absurd claim, the best might be to paraphrase Jesse Eisenberg’s Mark Zuckerberg: “If you could have created Superman, you would have.”)

In that context, the prospect of a young Man of Steel clad in jeans and work boots and operating in a radically re-envisioned Metropolis struck me and many others as yet more grist for the intellectual-property mill. A few months ago, I got into a bit of an online kerfuffle with DC writer Kurt Busiek when he not only pooh-poohed those concerns but stated confidently that -- wait for it -- the legal department of DC parent Time Warner has never once attempted to influence the content of its comics.

OK, so it’s nothing new for a comics writer to act as if his readership is completely stupid. But if I had to argue Busiek’s laughable proposition in court, I could, ironically, ask for no better an Exhibit A than Action #1, which is closer to the original Siegel/Shuster interpretation of Superman than almost anything DC has published in the ensuing 73 years. I guess Grant just didn’t get the memos, because his take on the character and his world positively overflows with the spirit of ’38.

Some examples: Much more is made of Supes “leaping tall buildings” than actually flying. Clark Kent’s boss and editor, it’s suggested, is once again George Taylor, and not his eventual successor, Perry White. And as that last sentence indicates, Clark and Lois Lane still have jobs as reporters, not mild-mannered bloggers for their great metropolitan selves. For all the justified ridicule that greeted DC’s decision to completely renumber many of its classic titles, the book that Action #1 most reminds me of is

The most important factor in that nostalgic equation, though, is Morrison’s view of Superman as a societal force: Like the Siegel/Shuster conception, the Last Son of Krypton is a gleefully judgmental activist/terrorist who’s belligerent to all the right parties, from corporate fatcats to slumlords to neo-Nazis to wife-beaters. By page 3, he has already declared his disdain for anyone “who still believes the law works the same for rich and poor alike.” Whereupon he dives off a building with one such fatcat in tow, scaring the bejeezus out of the guy and thus extracting a confession for using “illegal cheap labor,” following “no safety standards” and “brib(ing) city officials.”

Ho-lee crap, Morrison missed a buncha memos. Earlier this year, before the company-wide reboot was even a thing, DC pulled the questionable P.R. stunt of having its flagship character renounce his U.S. citizenship (in a story that hit the stands mere weeks before SEAL Team 6 took out Osama bin Laden. Whoops!). The outcry from Glenn Beck and his ilk was loud and predictable, to the point that DC killed a subsequent story that would have suggested Clark Kent has a single Muslim-American friend. Herman Cain might have registered deep satisfaction at that outcome, except that he refuses to read documents that are longer than three pages.

I can’t wait until the Right gets a load of Morrison’s new series, which couldn’t be more winkingly progressive were Michael Moore credited as a creative consultant. What’s truly ironic is that, for all of the efforts DC has in the past undertaken to make Superman “relevant” to the current moment, Morrison has done just that by taking the character all the way back to his roots. The new Action feels ripped from today’s headlines simply because today’s headlines are ripped from last century’s. The loudest and most influential voices in American policy are unabashedly hurtling the country back toward the socioeconomic inequality and moral bankruptcy of the pre-New Deal era. And if we don’t have a latter-day FDR to do anything about it in the real world, at least we have a fictional champion to fight those battles for us as a four-color proxy. If he plays his cards right, I bet he could even get his own book.