In the normal run of things, there are very few love triangle films you would ever find me enjoying on the sly, let alone openly praising and defending, but Shunji Iwai's Hana & Alice is one of them.

A beautiful, deceptively complex film, one that is as touching as it is funny, and one that works just fine on its surface but that gets better and better as you peel back the layers, Hana & Alice concerns the lives of two teenage girls living in the suburbs of Tokyo as they are about the graduate junior high and move on to high school.

Hana (Anne Suzuki) and Alice (Yu Aoi) have been joined at the hip for years, best friends that are so similar and used to each other that they move in unison, something helped along by their ballet classes. When we first meet them, Alice has fallen deeply in love with a boy she sees on the train platform every day, a Japanese-American mix who Hana isn't interested in. As an aside, mostly joking, Alice says she can have his little brother, Miya (Tomohiro Kaku). Hana's nose immediately crinkles at the idea, but its posturing to hide the embarrassment from Alice. Her eyes tell the real story: something in her brain makes her want him.

What exactly that is is hard to say. Thinking back on some of my high school crushes, I can't explain the attraction either. It was just a fact. Like the sun rising every morning and setting every evening, there was a crushing weight on my shoulders. 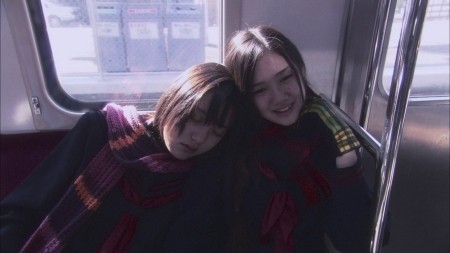 I'm somewhat hesitant to provide a synopsis because the film defies explanation, really. It is the sort of silly-serious material that needs the right hands to works, and in Iwai, it does have the right hands. Iwai is a master filmmaker, and material that would be weak and frivolous in anothers hands are spun into lace by his. We are meant to laugh a little at the girls, at the lengths they go to for such a fleeting end, but we are meant to empathize with them as well, to see the silliness through their eyes, to see that it's not silly at all, it's just one of those things that slowly gathers an unstoppable momentum.

The film actually began life as a series of internet shorts commissioned by Kit Kat Japan for their 50th anniversary. Its popularity quickly sent it into a feature production, but the film still has a vingette feeling to it, weaving together several concurrent stories rather than relying on a heavy plot. At it's core, the film is essentially a gentle stalker comedy, but it is so intensely self-aware of what its comedy is, where it is and how to mine it, that it somehow manages to escape creepiness. Any hint of creepiness is immediately defused by subtle absurdities, well timed self-deprecating jokes and ultimately by the lively charm of characters themselves, even though the spin out of control into a jealous rage over Miya by the end.

Love triangles are one of the worst inventions of life, never mind the movies. Guys fight over girls, girls fight over guys. It's usually for shallow, petty reasons, where the girl or guy in question has been stripped of their flesh and humanity, transformed into a golden statute, a trophy to win. Positive traits are hyper-focused on and the openly visible negative traits are handily ignored. In the end, they are hardly ever worth all of the anguish and bickering they cause. Most love triangles, though, are a natural outcropping of competitive relationships, where you want to possess the things your friend wants or already has because of our stupid lizard brain remnants. It comes in quite a different flavor in Hana & Alice. There is no machismo or catiness to contend with here. In fact Alice is only spending time with Miya as a favor to Hana to deepen the "truth" of the game she is playing with him. In Alice's desire to please her friend, she builds an even more elaborate game with Miya, one that they both have trouble easily dismissing.

Whenever I show this film to someone, or make them watch it against their will, they always turn it into a contest of which girl they like better. The answer is always -- always -- Alice. Even the girls pick Alice. It's not hard to see why people would immediately pick her. She is adorable, sweet, intelligent and quick witted. Her ballet makes her graceful, and we see all of that right out in front.

I've never personally made a decision between the two. I like Hana as much as I like Alice, though for conversation's sake I usually side with Hana because no one else does. You have to work for her, take time to consider what makes her tick. On the surface she appears to be the more mature one, more eager to be an adult and quickly grow up than Alice. But inside she still retains the romantic notions and emotions of childhood, though they manifest in decidedly mature ways. Whatever her deceits, they are very adult in nature, even if the intent behind them is juvenile. Much of the material added to make it feature length focused on Alice's family, so Hana lacks a certain depth of story development, but there is enough visible to make small leaps of faith about her character and background. In that way, she is a little bit more rewarding a character to spend time with.

There is a hazy quality to the cinematography, something like a shadowy, overcast day that follows the film around, even in the bright sunshine of the spring scenes. It works like magic to the film, making it feel more like the fairy tale, and even though I know in my head that it's just a problem inherent in old digital cameras (Iwai has shot much of his work on video instead of film), and I know how much I hated digital cinema until very recently, I can't help but give it a pass in this film for the magic airy feeling it inspires in the film. I say airy, but really it's more about a heft. These problems in these years of a persons life are heavy stuff. There is a reason why everyone can identify with Charlie Brown and the rain cloud above his head, and that's exactly the feeling that is evoked here.

The film was shot by Noboru Shinoda, and was one of the last films he worked on before his sadly premature death in 2004. Shinoda, who appears in a cameo role as a commercial director, and Iwai had a working relationship that went back to 1994 when they made the short film Undo together.

Over 10 years they worked together often, building a truly unique visual style together. He was the cinematographer for  every feature length film Iwai had made up until his recent film, Vampire, Iwai's first feature length English film, which failed to secure North American distribution after mixed reviews at Sundance. Between 2004 and 2009, Iwai only has a documentary on Kon Ichikawa to his credit, and I don't believe it an accident, I believe it to be a period of mourning for his friend, who was such an important part of his films, and who might have gone on to direct his own as Iwai moved into more of a mogul role, giving directing opportunities to others he's worked with over the years on films like Rainbow Song, Halfway and Bandage.

Hana & Alice is available on DVD from most rental and retail outlets. The subtitles are a vast improvement over the import DVD and festival screening print. If it feels like I cribbed a little much from the Wikipedia page, it's because I wrote most of the Wikipedia page for H&A and other Shunji Iwai films. Yeah, yeah. I get bored sometimes.