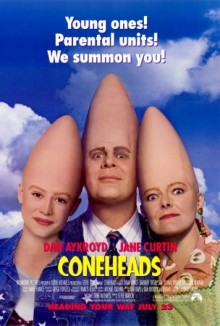 It may have just been the exact right movie at the exact right time in a less than bright teenager's life, but Coneheads has, for a very long time, been one of my go-to movies to cheer up to.

SNL sketch movies are hit-or-miss, but largely miss. Coneheads is one of the few that hit. With me and a lot of people my age. It is an absurdly rich and hilarious story of bureaucratic ineptitude that allows a pair of aliens to live among us, scouting the ins and outs of the planet for future domination. In the interim, they start a nice, suburban family and settle in.

The comedy does not come from the plot, which is fairly throwaway, though it does set them up into nice positions for great set pieces. It comes through the situations that arise wherein the Coneheads are either superior or inferior to humans. It is an eminently quotable piece, one that goes way beyond the "parental unit" catchphrase that entered the lexicon. Tombstone may be the only movie of the middle-90s that is more quotable. A well placed Coneheads quote text message will always, always do the trick with me.

It features genuinely funny turns from the regular band of SNL cast members, especially Jon Lovitz as the unsuspecting dentist, as well as Sinbad (yes, that Sinbad), Jason Alexander, and of course Chris Farley.

It also has, somewhat inexplicably, one of the best Red Hot Chili Peppers songs ever on its soundtrack.

If you've seen it and loved it, why not check it out again? If you didn't like it or haven't seen it before, why not give it a chance? It's free after all, and there will be beer and trivia.

Grab a beer (or two) and some munchies at Eden Bar and enjoy a FREE outdoor movie on the lawn at Enzian. Come thirsty for Jell-o shot movie trivia during the show – answer a question correctly and you get to pop back a shot!  Also featuring a special evening happy hour from 7PM -11PM, this night of great drinks and fun flicks is best enjoyed under the stars with your buddies by your side.