Well, this week the Academy Awards for the year 1994 became topical again, when Disney re-released The Lion King in 3D. One of the biggest (and best) animated films ever produced by the world's biggest feature animation production house, The Lion King broke through even the hardest of critical hearts with its Hamlet-inspired tale of young Simba, who may one day rule the jungle.

1994 was something of a turning point in the world of film. Not only was it the year of The Lion King in glorious 2D, but also of The Shawshank Redemption, Ed Wood, Clerks, Chungking Express, Eat Drink Man Woman, Heavenly Creatures, The Hudsucker Proxy, Immortal Beloved... well, you get the picture. Even the B movies -- like Brainscan, Airheads and The Chase -- were good. It was during this Oscar telecast that Quentin Tarantino and Roger Avary's friendship was forever split apart, all because Avery had to pee.

On top of all of that -- and something I had no idea of until now -- Peter Capaldi, who played the greatest television character ever, Malcom Tucker (in The Thick of It on the BBC and in the film In the Loop) won an Oscar for Best Live Action Short Film.

So why the hell did the amusing but dreadful Forrest Gump win best picture? Why, indeed.

Four Weddings and a Funeral

In a just, perfect world, this would have been a race between Shawshank and Pulp Fiction. In hindsight it certainly is. Even with the caliber of the rest of the films released in the year, it was those two films that shoot to the top of the public consciousness and are in the general conversation of Best Film Ever (in the top 100 for both, I would say).

Forrest Gump doesn't get a sniff of that conversation, so why did it win? Well, for one thing, most Academy voters are not irreverent 18-35 year olds. They are older and their voting has always reflected this. It's very, very hard to get into the Academy and become a voting member. It takes years and year of getting the right connections and usually you have to actually win an Oscar to join. It's not often that people as young as Diablo Cody or Sofia Coppola get to join (even then, they were both in their 30s when they joined), so the voting is usually skewed towards the safe money making picture of the group. There is probably no one in Hollywood with more friends in high places than Tom Hanks, and, really, he's pretty good as the character Forrest.

But while we temporarily let the Academy vote on the Best Picture in the short term, it's history that votes for it in the long term. The difference between Pulp Fiction and The Shawshank Redemption is very small. So small, it jockeys back and forth depending on mood and inclination. 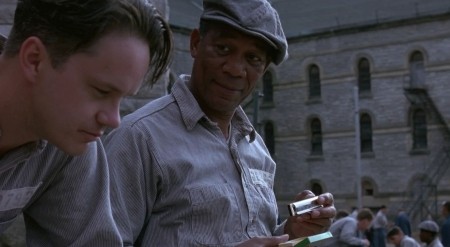 Shawshank is essentially a classic Hollywood prison tale. It's one of the things that Hollywood does best, even with the fact that very few directors have been in jail. In fact, between the makers of Shawshank and Pulp Fiction, it was one of the Pulp Fiction writers, Roger Avary, who went to jail. But still, it's a genre that works and works and works all day long, going back to the classics, likes Cool Hand Luke and The Birdman of Alcatraz. Andy Dufresne's life situation is not one we'll likely ever have to experience for ourselves, but it's something that, perhaps not unfairly, we've become conditioned to fear: that the cops will nab us, the wrong man, and send us away to jail where Bubba will make us his wife. It's something we can empathize with, and cheer along with when Andy makes his fateful crawl through... well, you remember. It is perhaps just as useful in a "what would you do?" capacity as it is a story of deep friendship between Andy and Red. 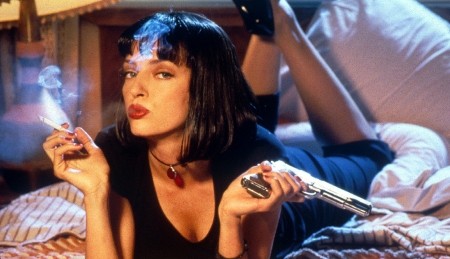 Pulp Fiction is something else entirely. It is, simply, a story of cool. Cool oozes out of the seams, out of ever cut the editor Sally Menke made to assemble the film. In a sense, it is also a classical Hollywood yarn, but so remade, so much cooler, with so much more style, so much more relatable, again, even though we are not killers or heroin addicts, that it was a fresh and new style bomb set off upon the industry by Quentin Tarantino. It made him, it made Uma Thurmon and Sam Jackson, and along the way it remade Bruce Willis and John Travolta, and, sort of, remade Dick Dale, introducing a whole new generation to his music by making Misirlou its theme song.

So which is the Best Picture winner as far as history is concerned?

They may be more equal than any other losers in Oscar history. For my money, despite the fact that my personal favorite film from 1994 is Wong Kar Wai's Chungking Express, I would have voted for The Shawshank Redemption. Still, if you look at a lot of other Best Picture winners of the period, Pulp hands down beats most of them. I wouldn't want to live without either of them.