by T. I. Fraser and Paul Heibing 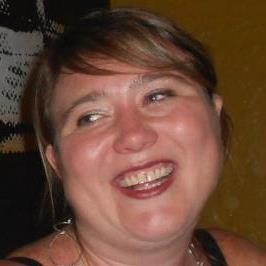 Kelly Fitzpatrick was a true local personality. When she died at age 36 on Friday, Sept. 23, her friends and family lost a soul full of pure goodness, and the city of Orlando lost one of its best and loudest cheerleaders. Kelly was best known as the nightlife columnist for the Orlando Sentinel, a duty that sometimes meant writing long, dry articles listing holiday festivities, but more often centered on delving into the philosophy of what makes a bar or club a success. In lesser hands, this would be done with a technical precision, focusing strictly on drink costs, number of seats, décor, etc, before casting judgment. Kelly, however, used another metric by which to analyze the places: fun. Just as some people know how to play piano or solve calculus problems, Kelly knew how to have fun. In her reviews, she not only looked at what a bar was offering, but also whether the patrons were having a good time, because that, she argued, is the measure of whether a venue – be it bar or sandwich shop – would be a success. If Kelly, who could unearth fun even on a frozen riverbank, could not find a way to have a good time, the place was doomed.

Her spotlight never wavered far from the local arts scene, and she used any flimsy tie-in to alcohol to mention art installations (in bars), (drunken) spoken word poetry or the Fringe Festival (which has a beer tent). Through painting with a wide brush, Kelly’s column became a travel guide to experiencing and exploring Central Florida, not simply about how to go out and get drunk (well, most of the time anyway; there was that epic cover story about how to stay drunk in Orlando for 24 hours).

Orlando is a tough city to love. The theme parks and tourism and transient population do not a cuddly metropolis make. But Kelly defied the spiny exterior of the city and went out of her way to find the best it has to offer, and not just within the confines of watering holes. She could be found exploring galleries, independent music, food, literature, innovation and culture almost every night of the week. She was always out, mingling with business owners and customers, poets and readers, bartenders and drinkers, giving her time and conversation and belly laughs to them in equal measure. It would be hard to argue that any event or venue lived or died based on Kelly’s word of mouth, but there is no arguing that if Kelly was going, you’d be remiss to not show up.

Every so often, you hear the haters complain that we need more of that “New York vibe” in Orlando. They’re half right: We don’t need more overpriced and overglossed bars, but we do need more people in them like Kelly. What she brought to her job and her many friendships was a brutal honesty born of her childhood in the Bronx – and a warmth that made you take the truth with a smile.

The quality of presence – that indefinable x-factor that draws attention to one voice in a crowded room – radiated from Kelly. She was so infinitely and instantly likable that it was near impossible for the acquaintances she racked up in all her gallivanting to not consider her a friend. But beyond mere pretense, beyond some professional courtesy, Kelly earned the love she garnered. She lent an ear to your troubles and a hand wherever she could. She made herself available to the entire city, as if it was part of one giant extended family.

It cannot be emphasized strongly enough that we did not just lose a local blogger, columnist, celebrity or personality when we lost Kelly; we lost the best that Orlando can give back to itself. She was a being made of laughter, kindness, mischief, hugs and joy. Those that knew her best saw her for what she was: a heavenly gift. We jealously figured that we would have her around forever; never thinking once that we’d have to give her back so soon.