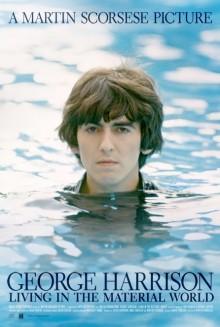 All of you Beatles and Scorsese fans, don't forget to set your alarm or your DVR for HBO tonight when Part I of the two part documentary about the legendary George Harrison premiers.

There is a great scene in Vanilla Sky where Tom Cruise and Kurt Russell are talking about -- judging, really -- people's lives by who their favorite Beatle was. It's an old theory, something I heard from my cousin Tim when 12 or 13. People have different favorite Beatles at different times of their lives is the basic gist of it, but I never had that. George has always been my favorite Beatle. Maybe I'll become a Paul fan in the future, but I tend to doubt it. The first song I can remember hearing -- really remember hearing -- was Got My Mind Set on You, driving in the car with my mom when I was really young, five or six maybe. The drumbeat is completely infectious, the multi-sax bridge, the chorus and even the repetitive chorus-like verses with that twangy riff laid to bed right underneath it make the whole thing the perfect first adult song for a kid to hear. It's a total gateway song.

Anyway, I always have a little more respect for people who feel the same way.

Part I airs tonight at 9pm.