October 06, 2011 at 10:56 AM
comment
Here’s something else for those Occupy Wall Street people to get up in arms about: All of a sudden, it’s gotten damned hard to find good TV to watch.

In just its second episode, Pan Am has wholeheartedly embraced its most trivial and mundane story elements; they might as well just rename the thing Flibbertigibbets. The Office isn’t funny without Carell, and there’s not enough James Spader for it to be truly squirmy. Meanwhile, NBC has ordered a full season’s worth of episodes of Up All Night for somebody else to enjoy. 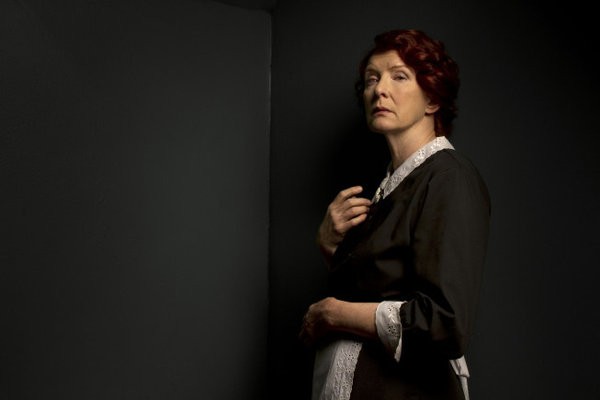 All I can say is, thank God for American Horror Story.

Put it out of your mind that this new show is from the creators of Glee (which I’ve never seen and never have to: I know more than two gay people, and can thus have any episode re-enacted in its entirety at a moment’s request). Stylistically and thematically, their new series instead answers the question, “What if David Lynch and Dan Curtis had a baby, and it grew up to remake The Shining?” A psychiatrist (Dylan McDermott), his wife (Connie Britton) and their snot-nosed teen (Taissa Farmiga) move into a California home where some truly awful stuff has happened over the years. Almost overnight, whatever haunts the place is attacking their psyches, playing on their history of familial strife and their every personal perversion.

The show is already doing some interesting things with point of view and editing. Two characters looking at the exact same thing may see something completely different. McDermott’s character, for example, sees their housekeeper (Frances Conroy) as a hotcha naughty maid straight out of Playboy’s Party Jokes, while his wife sees her as looking like

well, like Frances Conroy. At other times, the camera will zoom in ominously during an outwardly innocuous conversation, for no acknowledged reason. The effect is nightmarish, but not in the way nightmares have been represented throughout decades of movies and TV; these are the nightmares you have when you’ve spent years watching those films and programs, and your subconscious wants to show it’s still in the lead. At times, the narrative flow is so otherworldly that the scenes appear to have been assembled at semi-psychotic random, with pleasing perpetual disorientation the end result.

Sadly, some of the initial reviews have interpreted that dramatic choice as mere sloppiness. Several critics have also questioned the show’s believability, wondering why our protagonists would choose to stay in a home where terrible things keep happening. Obviously, Eddie Murphy has taught them nothing about white people. They also must have missed Stephen King’s pithy comments about the original Amityville Horror, in which he argued quite persuasively that a recessionary economy is among the best launching pads for terror. American Horror Story could be the first great haunted-house tale of the real-estate bust: Early on in the pilot, it’s established that McDermott’s family was only able to move into their new abode because it was selling for half the asking price of all the other houses in the neighborhood. Whatever they’ll be forced to face within its walls is nothing compared to the carnage that’s going on outside.

Believe me, I understand. I recently bought my first-ever house -- like the one on the series, a 1920s-era relic -- which I never could have afforded before the market tanked. At this point, I’d have to find out the place was haunted by Casper, Spooky and the entire Ghostly Trio before I felt compelled to pack a single sock in a suitcase. I’m in this for the long haul; so, I hope, is American Horror Story.