WE HATE ORLANDO! Or how today's State of Downtown speech self-helped us into personal ruin 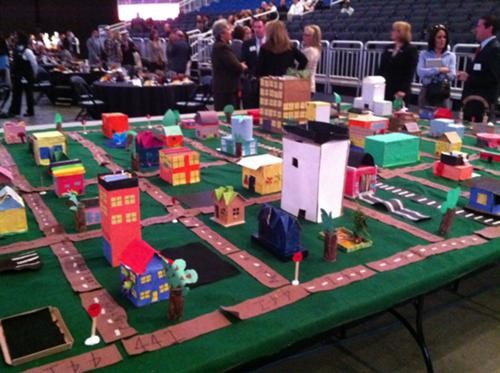 See that blurry diorama nightmare up there? That was the centerpiece of today's State of Downtown chamber-gnosh at the Amway Center – it's a bit of child's play issued by the students of the Nap Ford charter school in Parramore, fyi, so ... sweet! And, oh, how we wished it coulda-woulda ended with just that. Instead, what we – the moneyed people eating and the media – got was an overlong descent into skittish pratfalling and motivational speaking as conceived by hizzoner Mayor Buddy Dyer. Rather than going into the details (of which there aren't many that are quantifiable, short of jazz at the fountain and a new Central Station development that is, in fact, mixed-use in nature), we figured we'd just post the videos and let you see for yourself. Marvel, if you will, at the mayor's late-night canned video sensibilities as he parades his way through downtown to the event, picking up hot nurses and cheerleaders along the way. Gasp, maybe, at the notion that the city's new policy is to love itself openly (seriously, "All You Need Is Love" was played). Wonder aloud what this new "Giving Tree" notion could possibly mean – hey, everybody, pay a dollar and you can stick a note on a tree "for charity." Ugh. We're still wiping the stench from our skin at this public gluttony, so please forgive our lack of "breaking it down," so to speak. This was a pep rally for rich people laced with traces of The Secret. It was an abomination of obliviousness and branding. It was, as we say in the business, a rough morning.

And if you're intrigued, here's the whole damn thing, including a nonsense panel discussion with an "urbanist" who wanted to make sure that you understand how important it is that you LOVE ORLANDO! That's enough. We're going to be sick.